This was the first of my gas powered fluted plastic boats. I called it the Speed Boat. 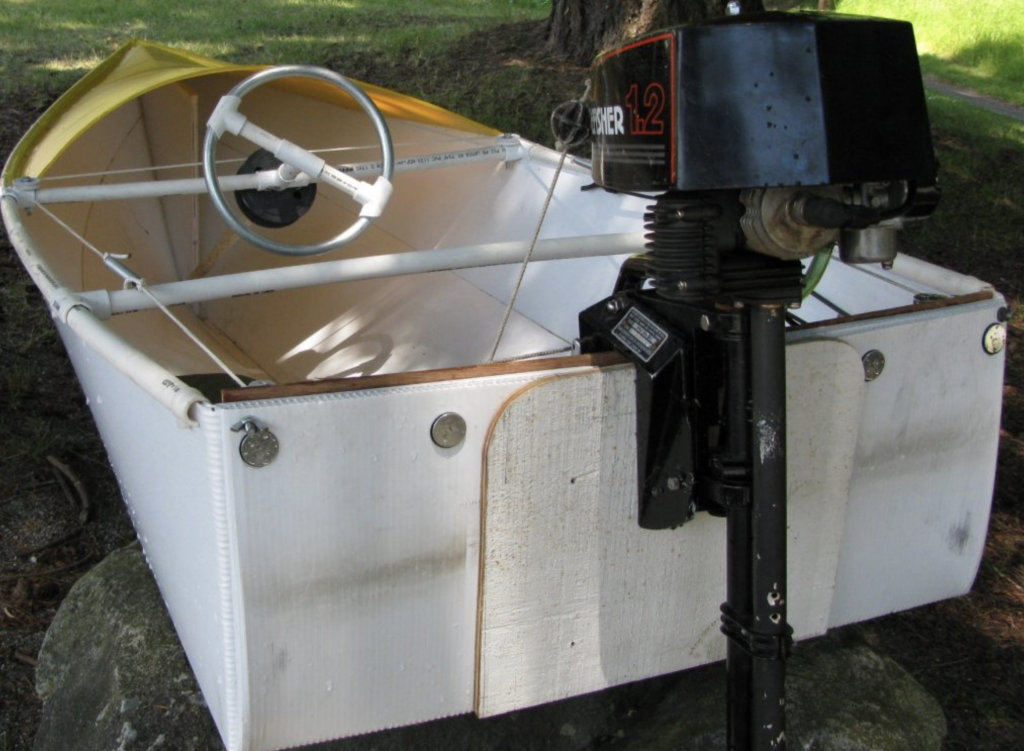 PVC was used for the Gunwales, but this proved to be a poor choice to secure an upper decking. Also the light weight 1.2 HP Gamefisher motor was used.

The fluted plastic was folded for the transom, creating simple water tight seams. 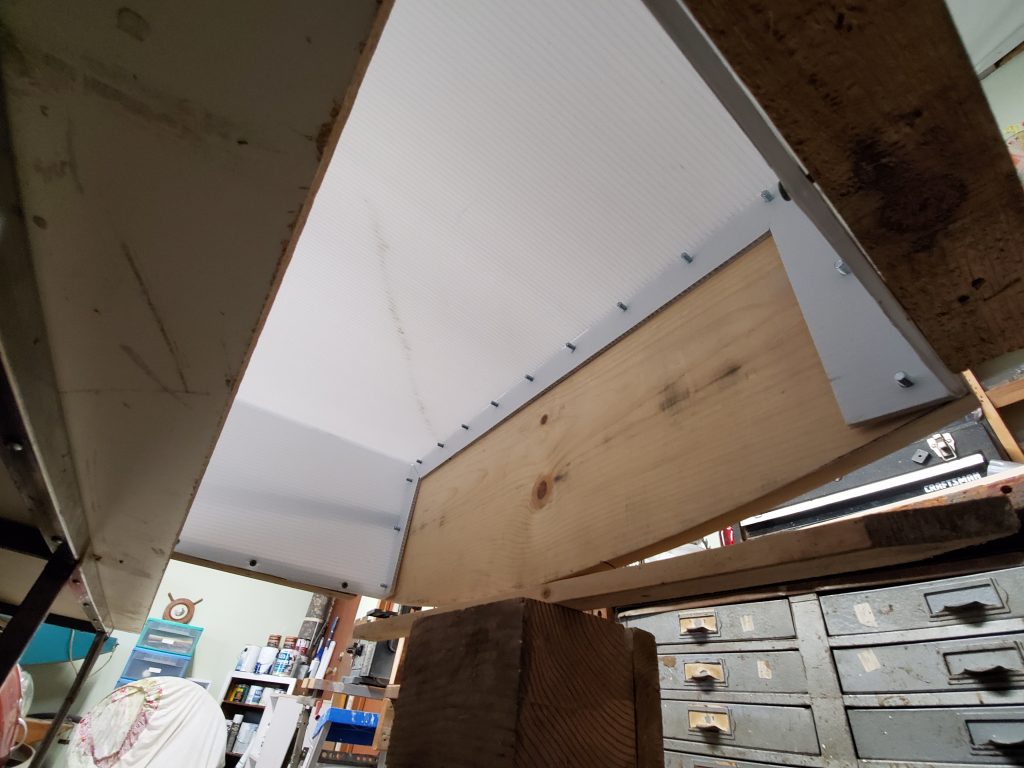 On this version I wanted to use my 3HP motor. This adds more weight, plus I’ve gained a few pounds since making my first Speed Boat.

To create more buoyancy I used a technique that I used on my Sparky boat; and electric boat with a heavy battery. This entails adding a 1×12 inch

wood board for the transom and using only 2″ of fluted plastic to attach to the wood. This increased the length by 7.5 inches. More buoyancy was created 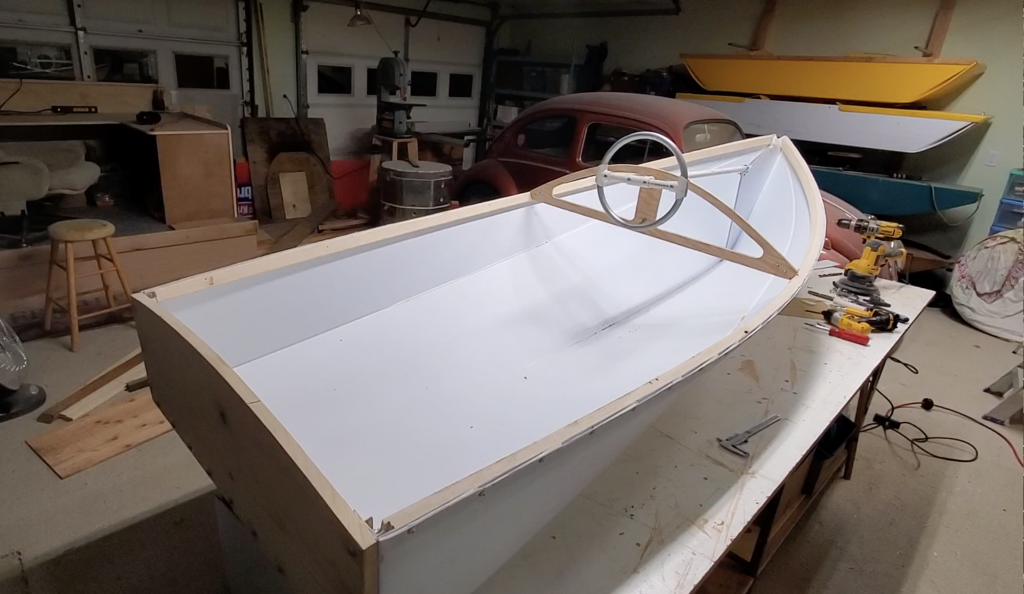 Each Gunwale consists of three 1-1/2″ by 1/4″ batten boards glued and formed to the naturally bent hull. The inner strips were angled up so they

could be planed and sanded flush to the future deck panels. 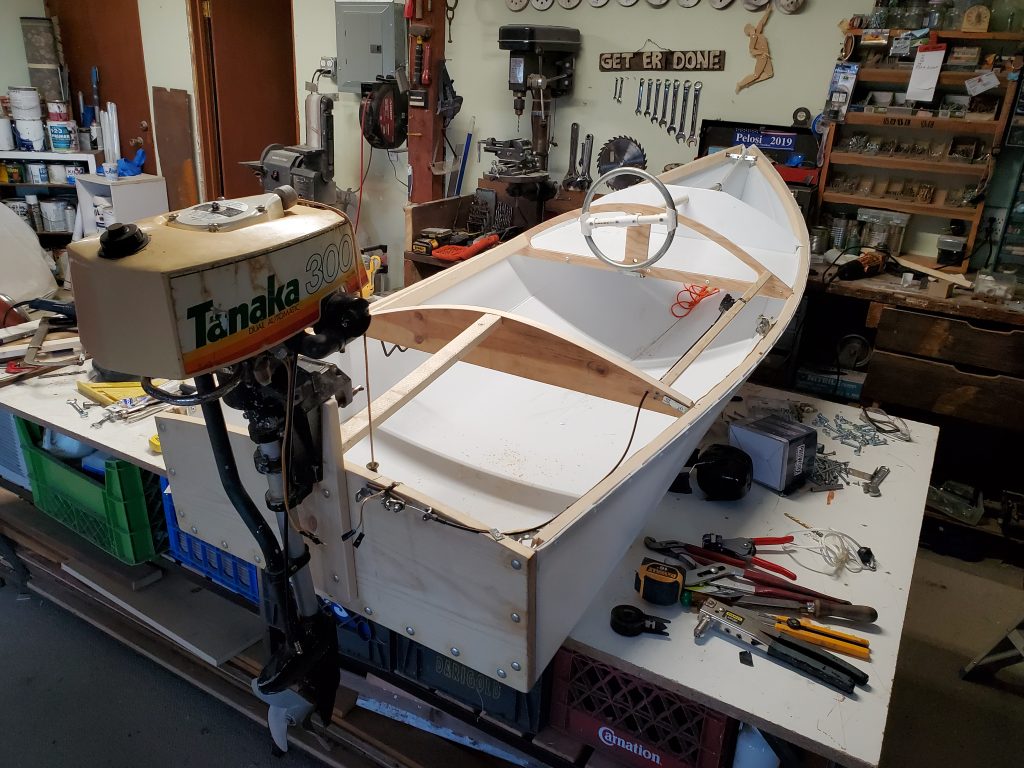 In this picture I’ve added all the bulkheads, the motor mount, steering, front storage tray, the throttle and kill switch. The decking is ready to be installed. 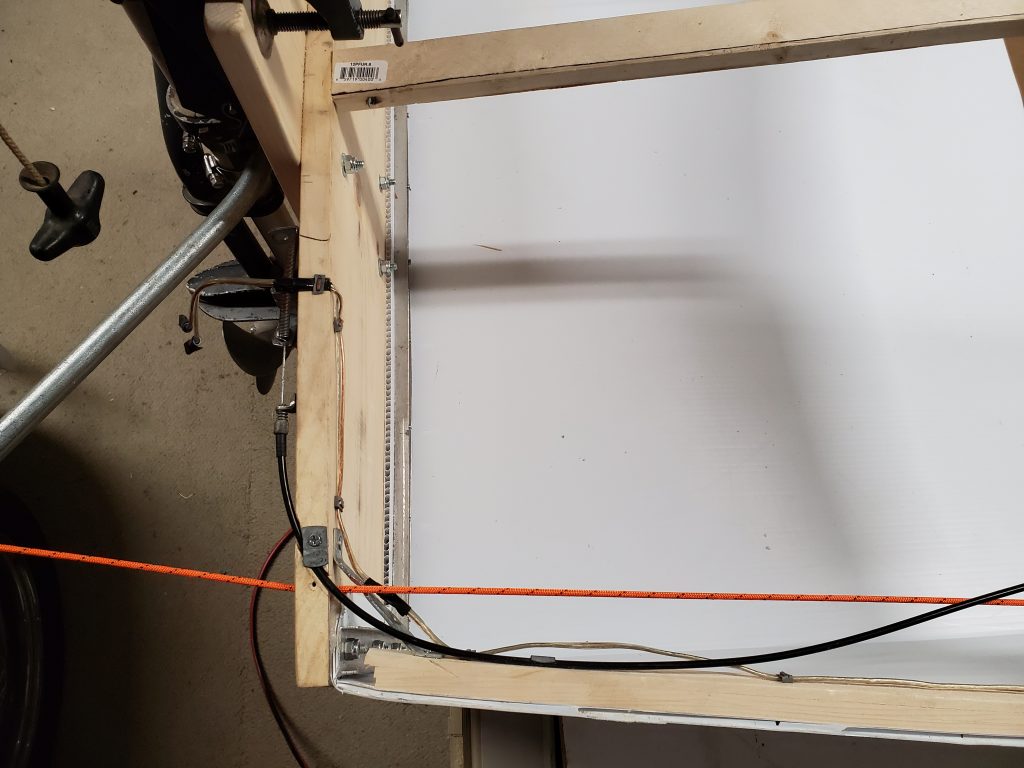 I wanted to conceal all the lines and wires for a cleaner look. 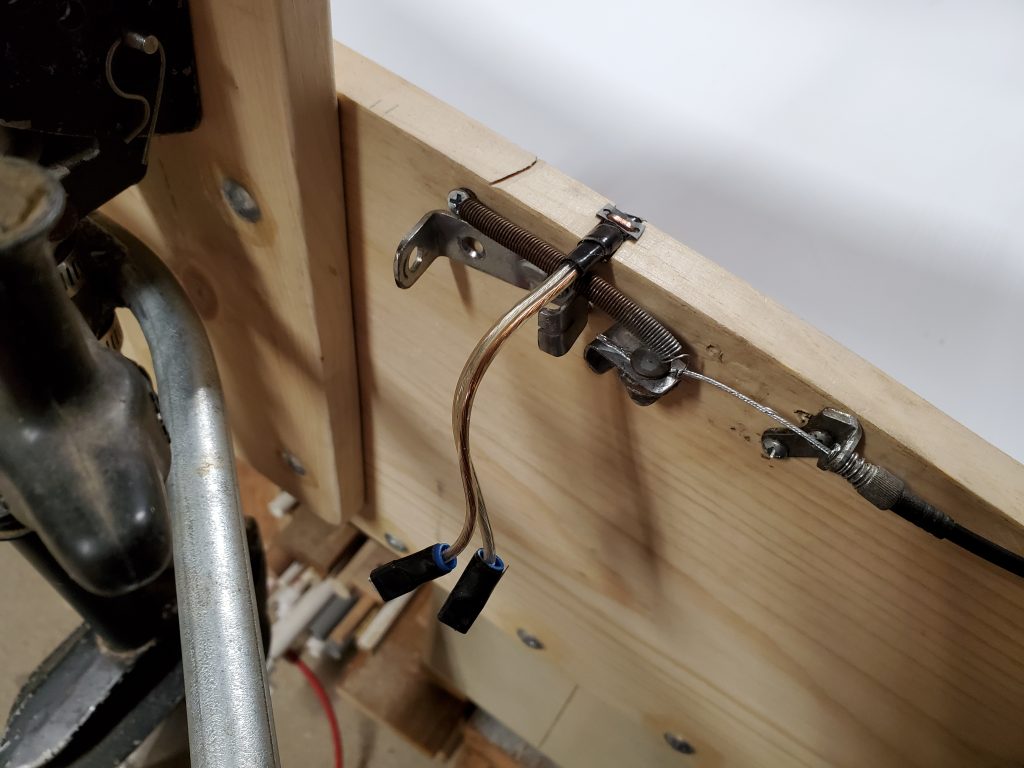 For the gas line quick disconnect I used a 90 degree bracket for the motor wire, a fashioned slotted ‘J’ hook for the motor cable end

to attach to, a bicycle brake bolt with a hole for the cable and a piece of mounting hardware coming off an old front bike derailer. 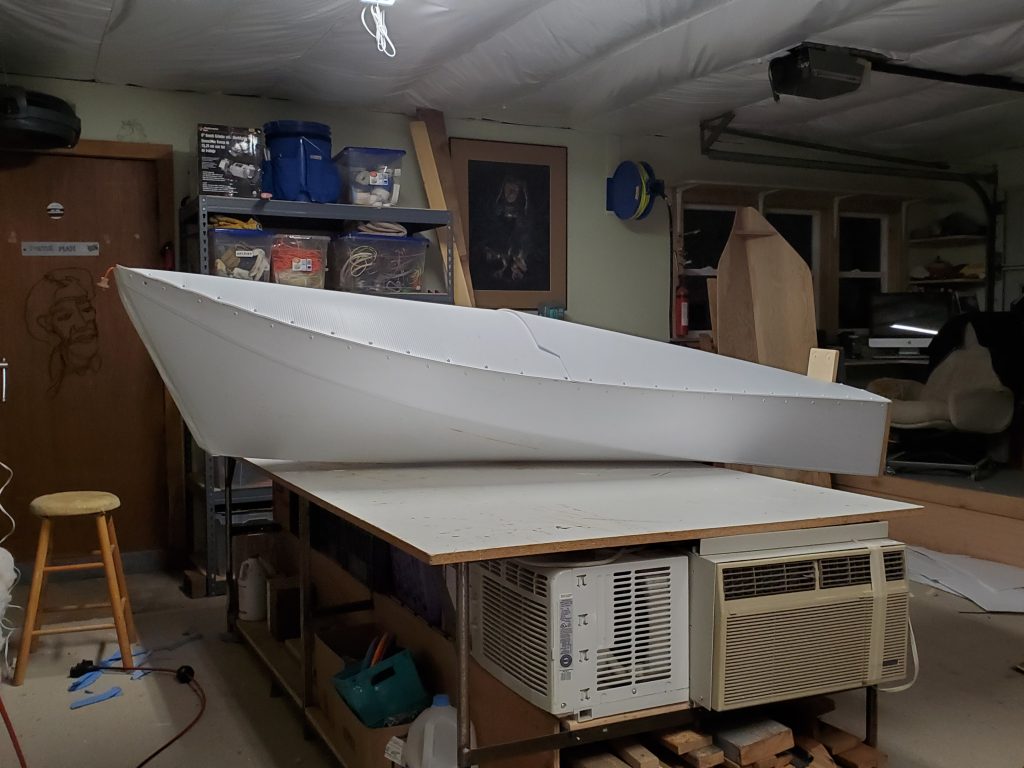 I used white aluminum button-head screws to attach the decking and hull to the Gunwale rails. Because the Gunwale battens were laminated together the glue

prevented the boards from splitting. 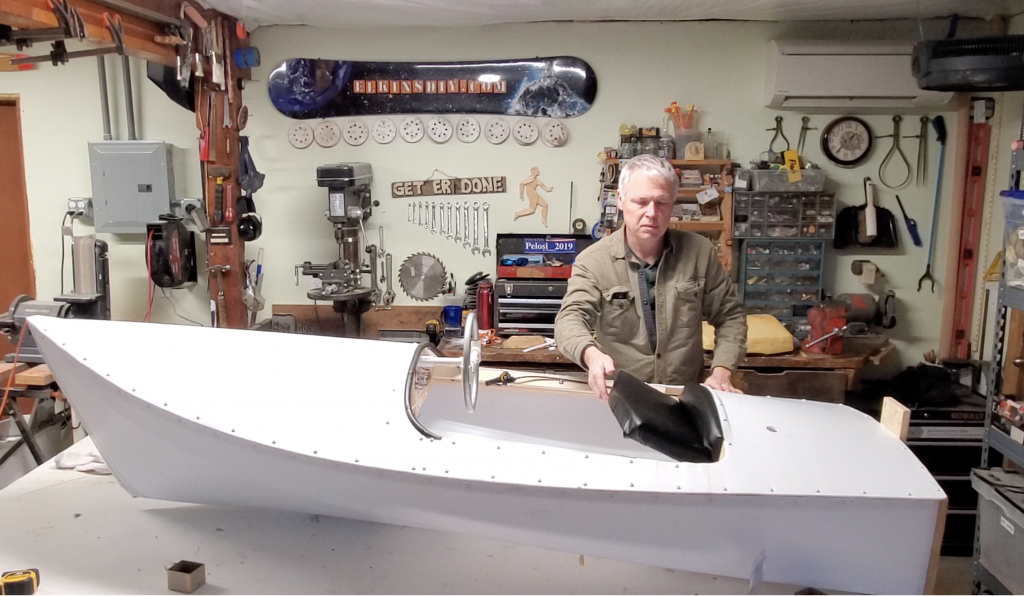 I started with apholstering the seat bulkhead, but later added the lower hinged section for better back support. The hinge allowed access to rear storage. 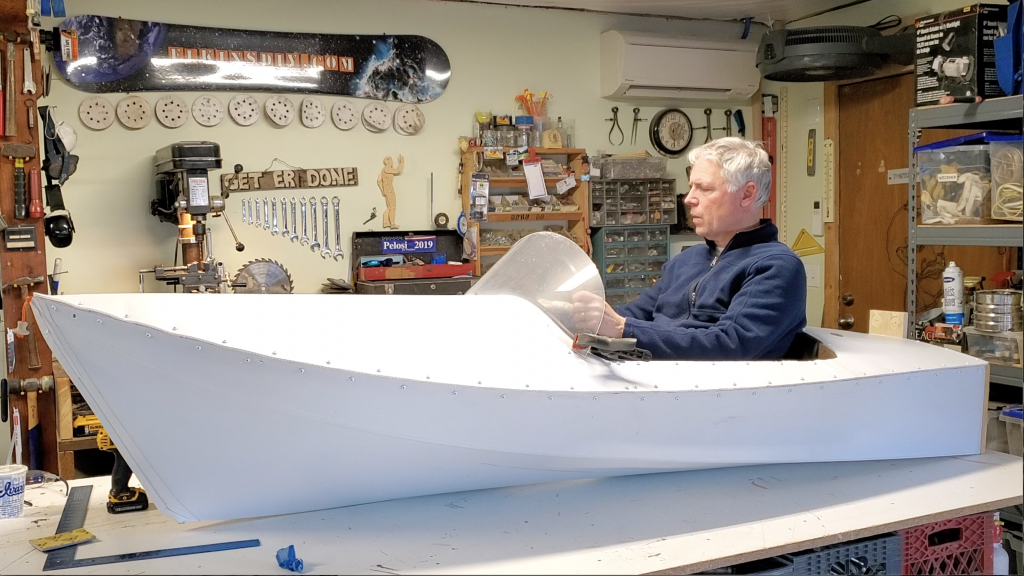 Here I am deciding whether I liked the new windscreen shape or not. I didn’t like it.

Here is the final shape. The orange line in the front is the tie-off line, which can be retracted into the front storage tray.

Foam was added the the front nose. Gorilla Duct tape covers the foam.

I used the same method to construct the steering wheel (Shown on build video) then covered the ring with rubber hose and taped over that.

Here to you can see the bicycle shifter used as the throttle control. 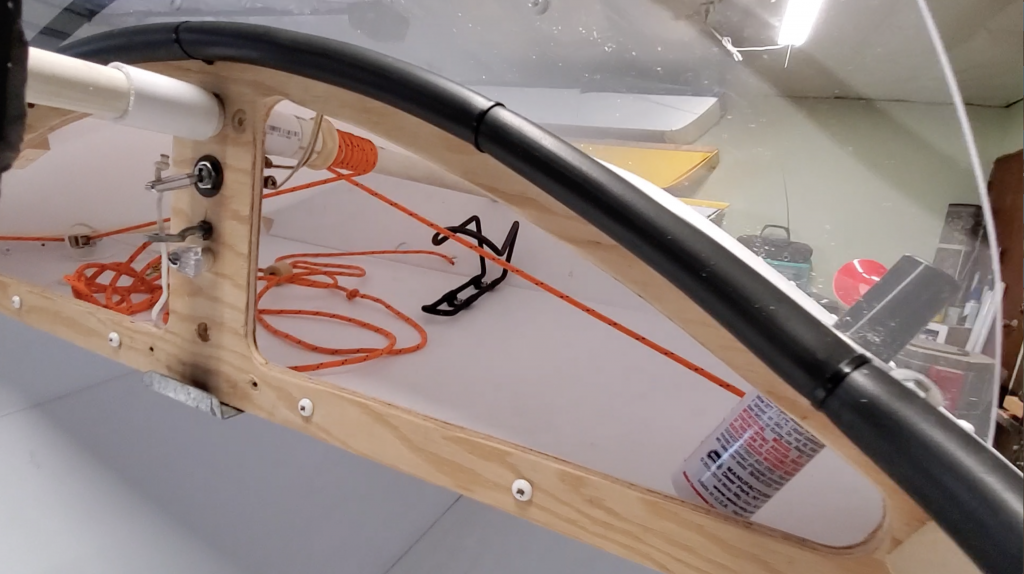 In case I fall out when the motor is running, I ran a line from the engine kill switch down into an eye hook and attached the other end to my wrist. 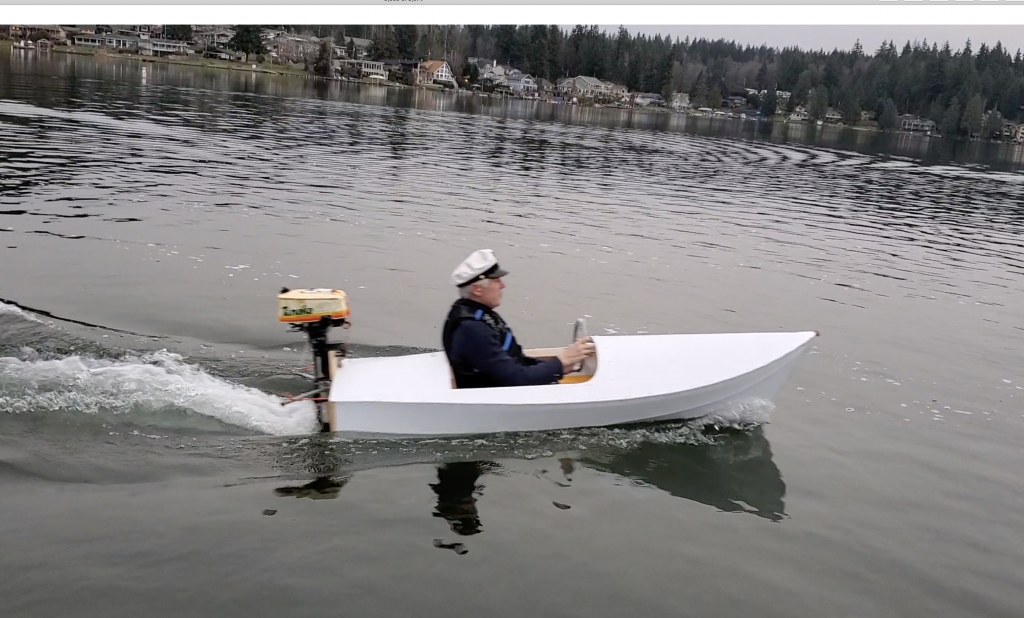 The boat tops off at 5 mph, but goes 4 mph with the engine mid rev making the engine quieter and more economical. 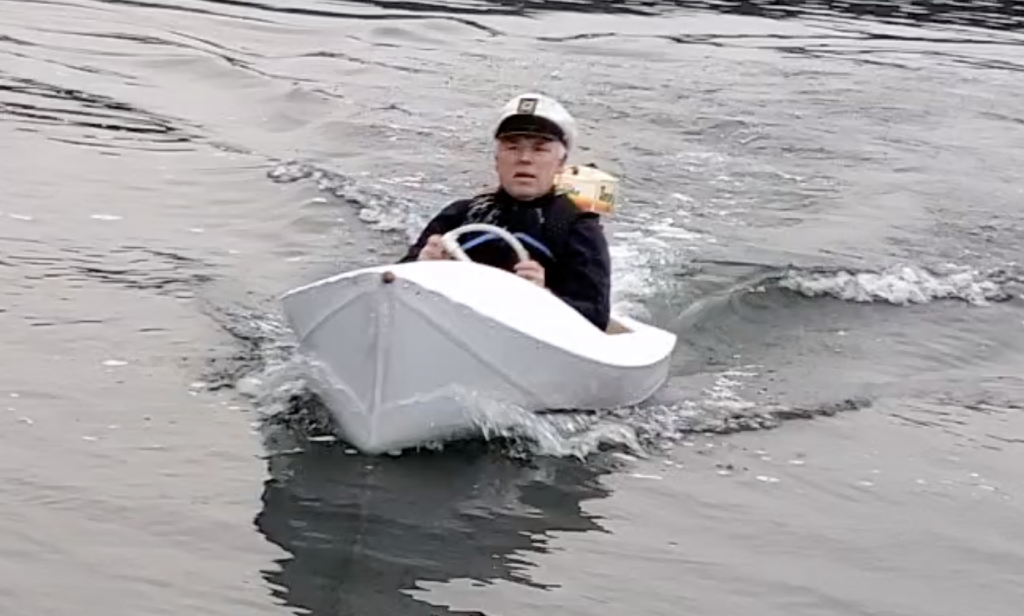 This is the wides of my boats. The outer gunwales are 36″ apart making the boat a bit more steady when entering and exiting the boat.