This was my first try making foam board shelters. I have to credit Vina Gupta for developing the foam board Hexayurts.

But I wanted something original, so I chose a 12′ square pyramid to hang out in and an octagonal teepee for the bedroom.

old buddy GI Joe was instrumental in modeling my idea. The middle flat panels have a seam so the shelter can fold like an accordion. 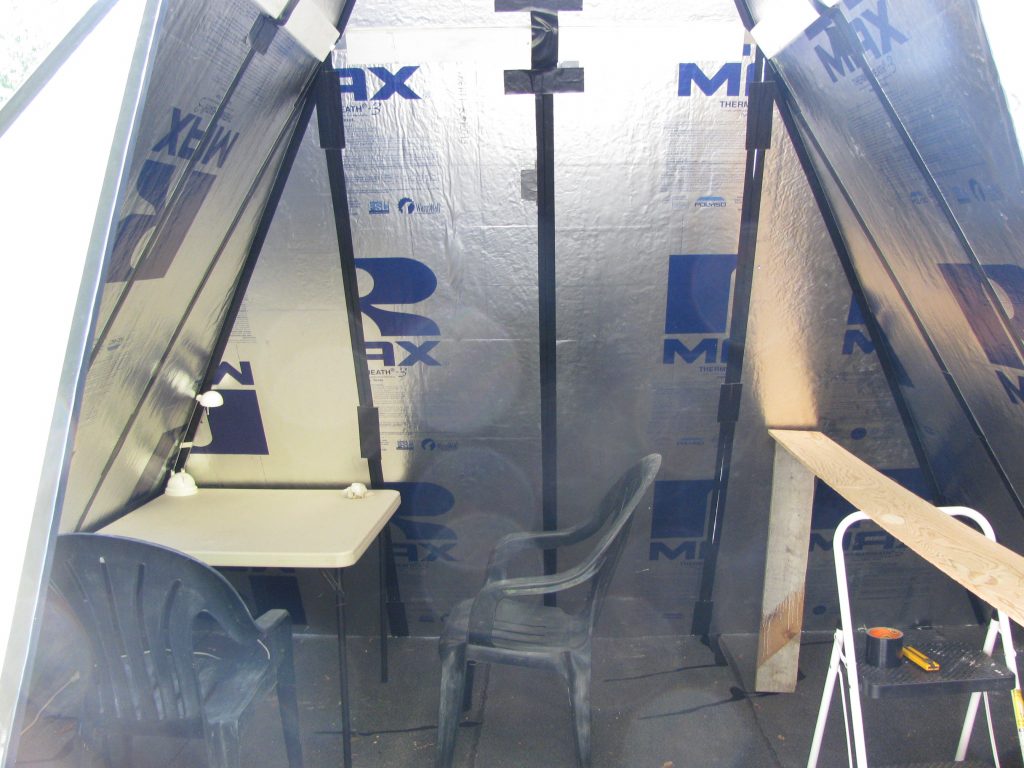 Here’s a preliminary shot of the interior. 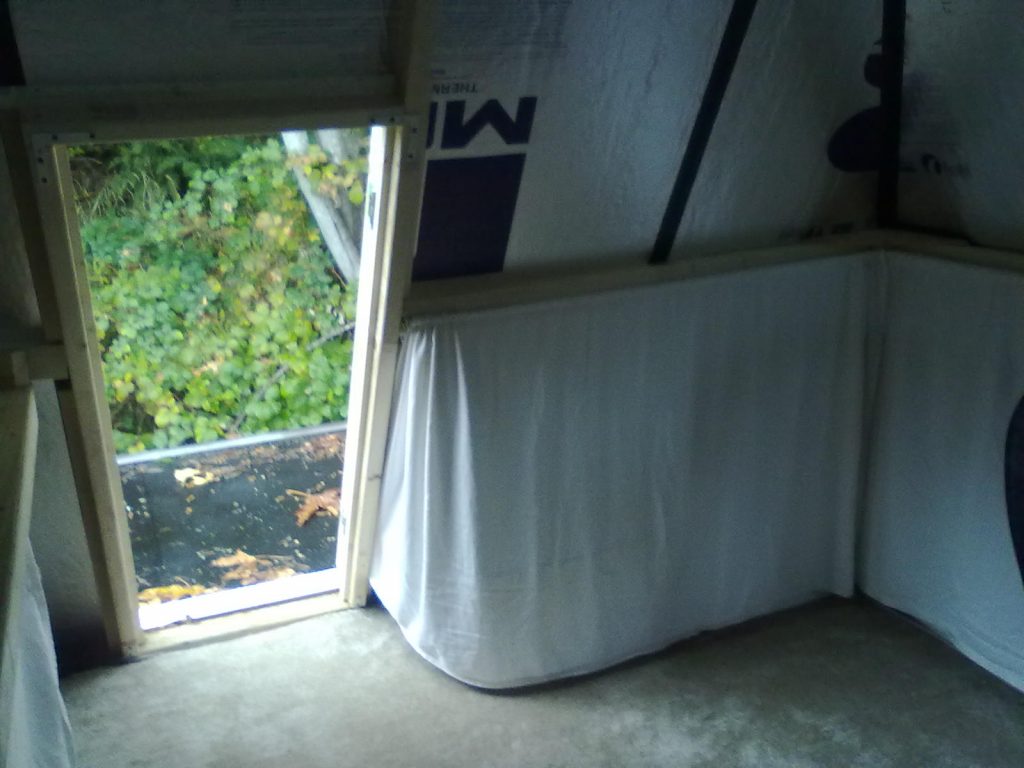 2×3″ boards were added at the 3 foot level to help support the wall from collapsing. Bed sheets were used as a cover for the storage bins.

A door frame was added with the board on the right going up and attaching to one of the cap boards shown on the photo below looking straight up. 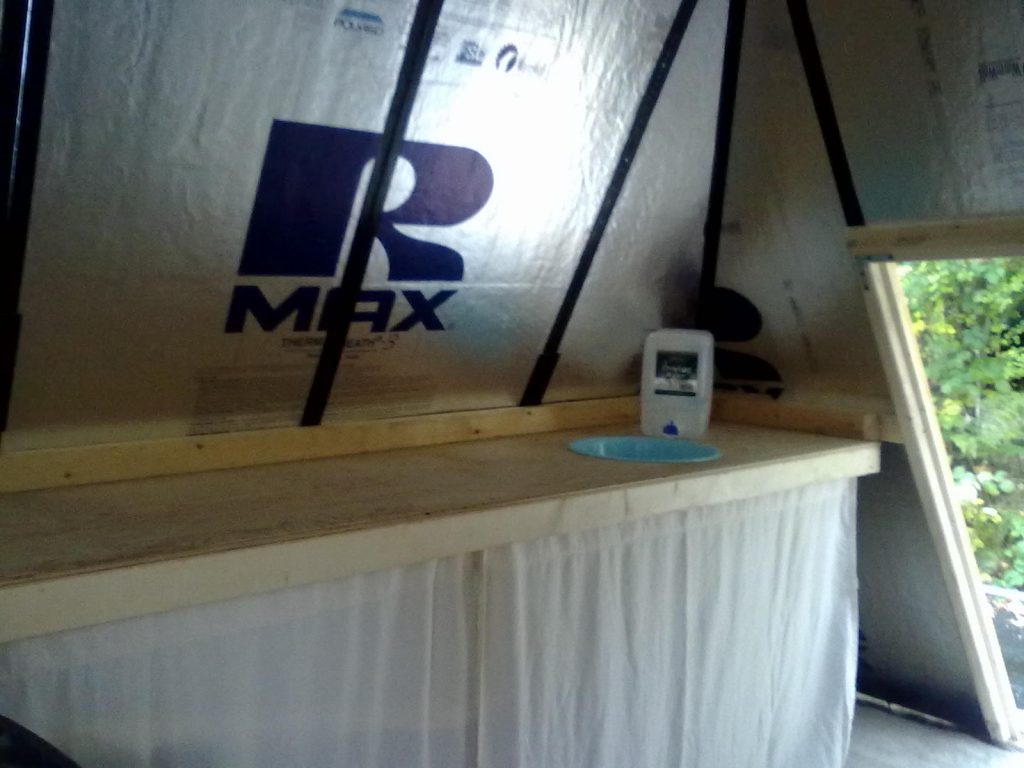 I built a 2x8ft table and attached it to the supporting wood frame. 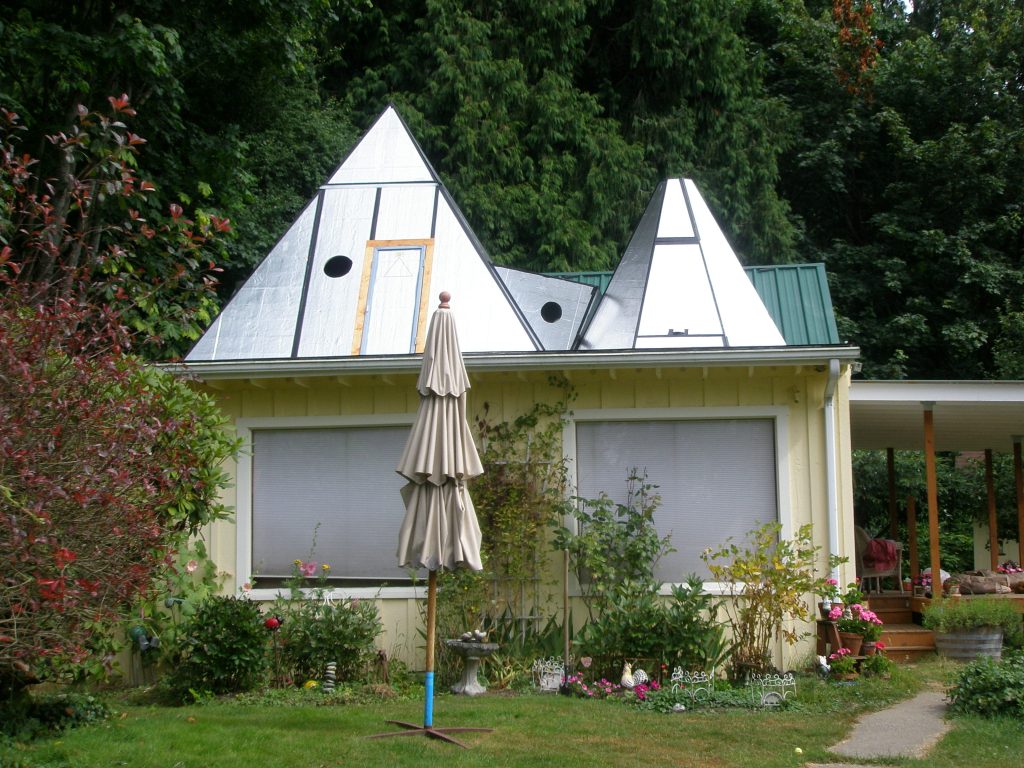 The only flat spot to erect the shelters was on the roof of my living room! Notice the extension on the pyramid. That went away. 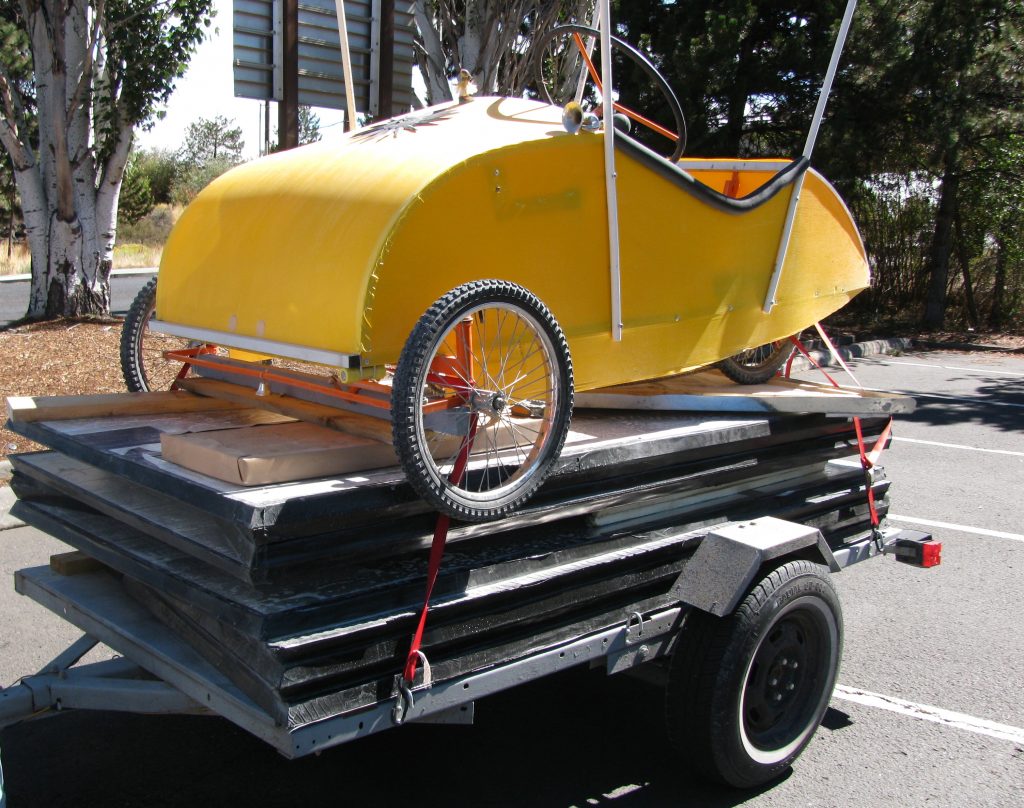 Here is the Pyramid, the Octagon Teepee and my pedal car sitting on my trusty Harbor Freight trailer. That’s a K car rear end underneath.

The original wheel bearings seize up on the way to my second Burningman adventure. A kind DIY guy fixed me up for $40 and we were on our way. 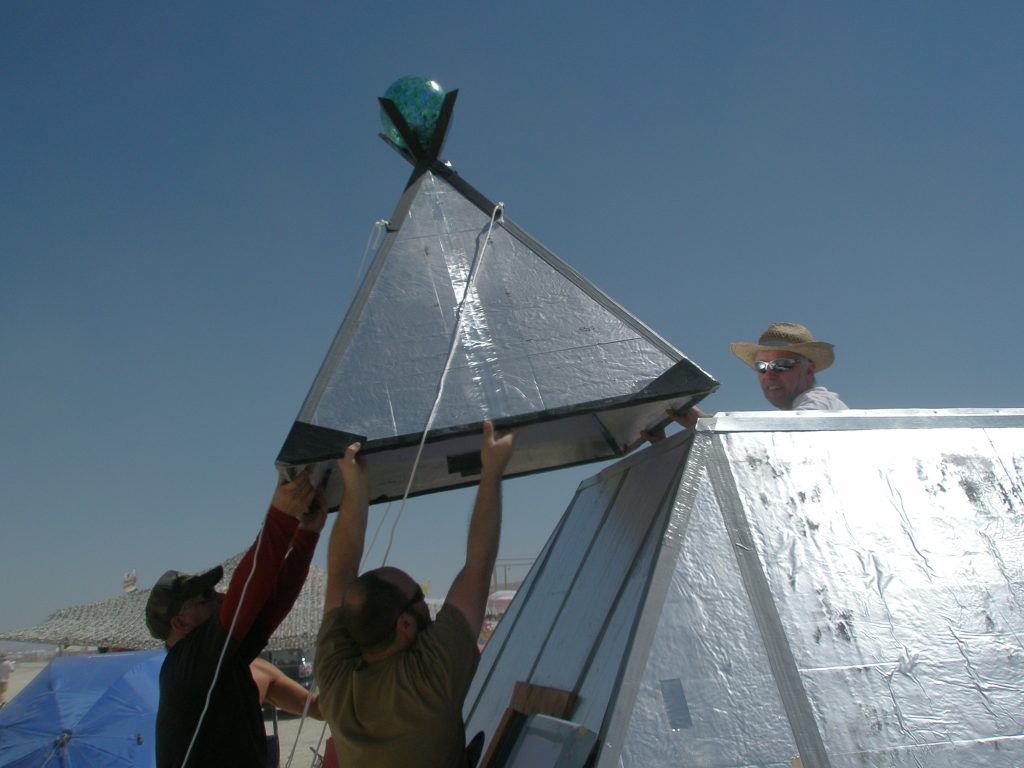 We had good helpful neighbors. 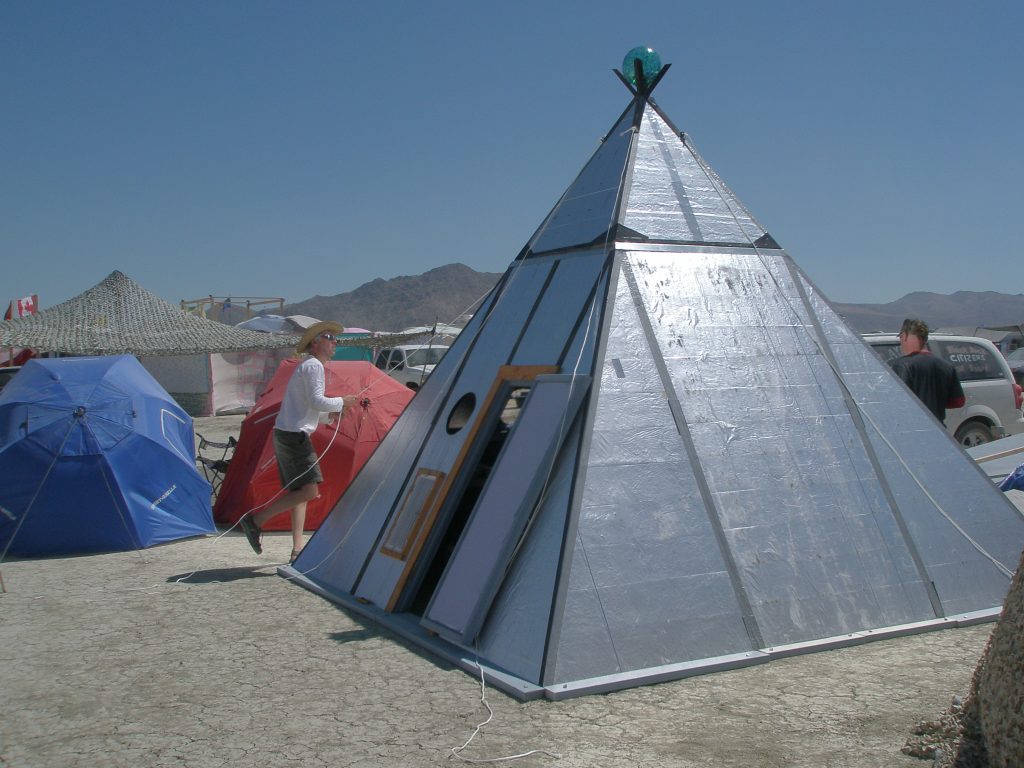 I added 2×6’s to the base to keep it from moving during sever winds. 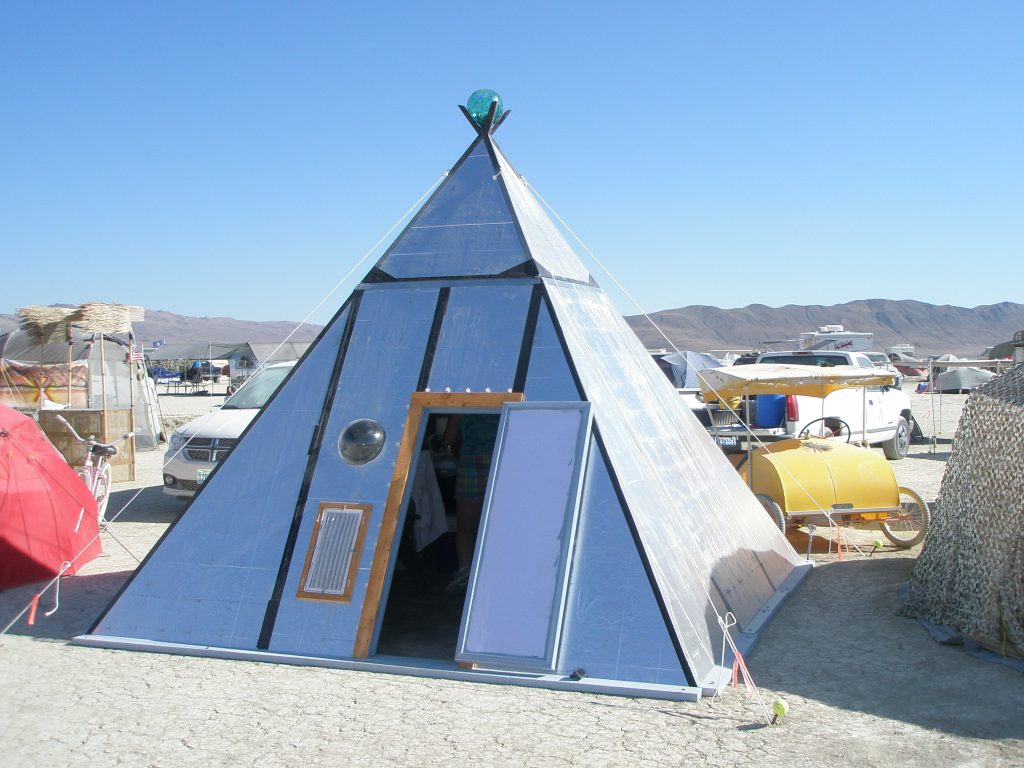 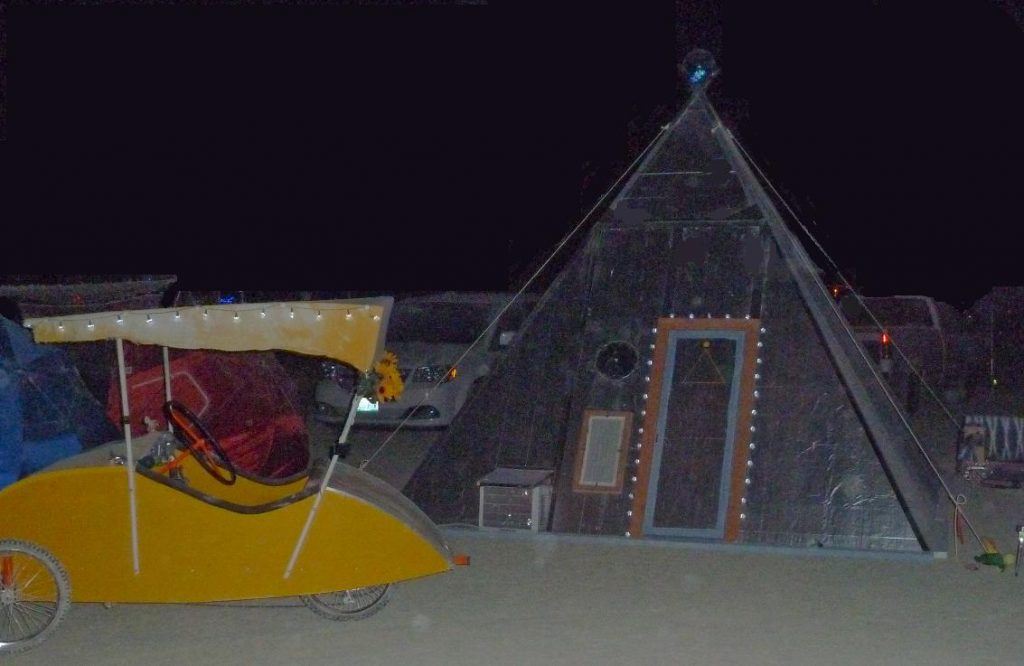 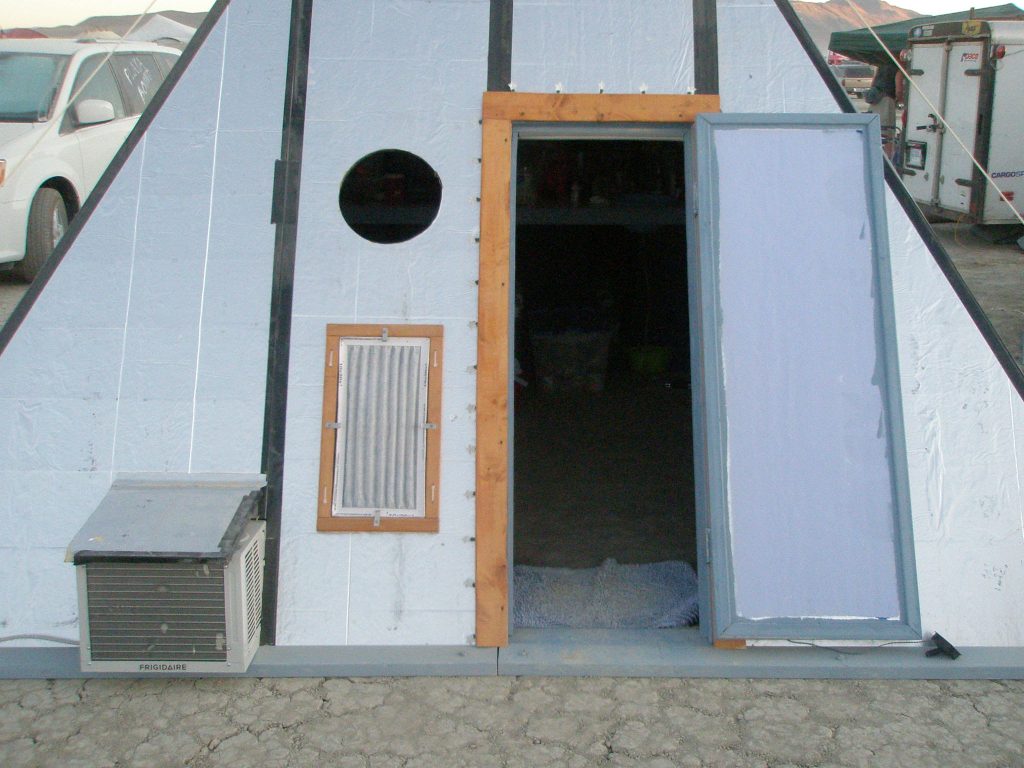 I added an Air Conditioner. This was instrumental in keeping us cooled down during the heat of the day. 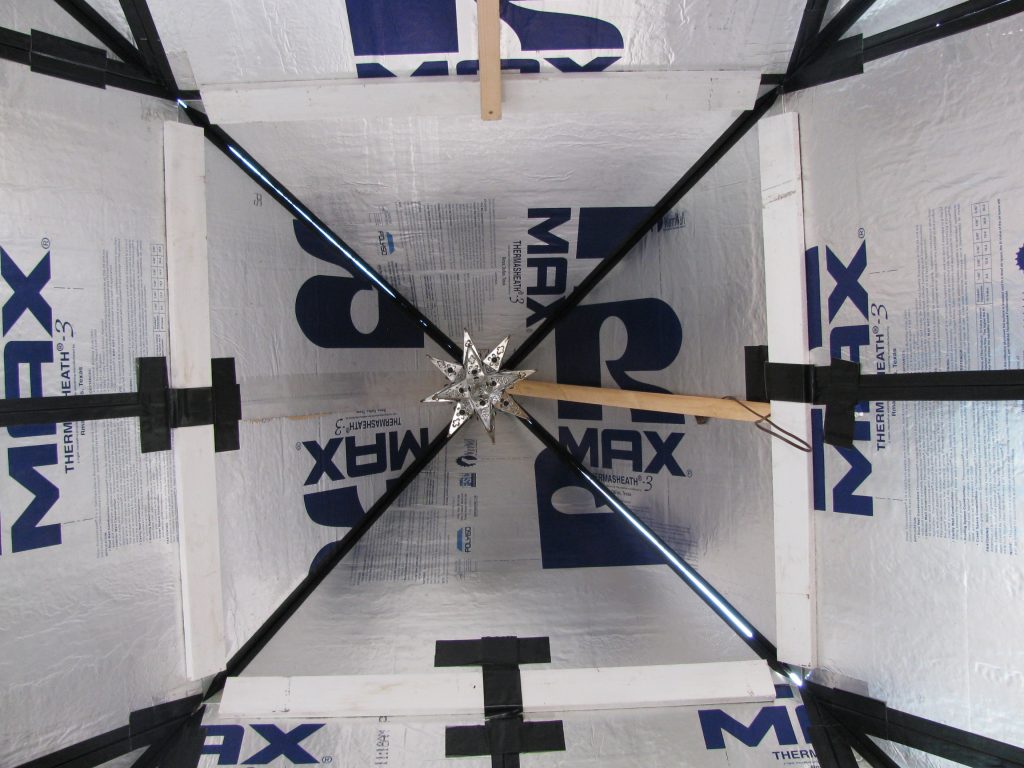 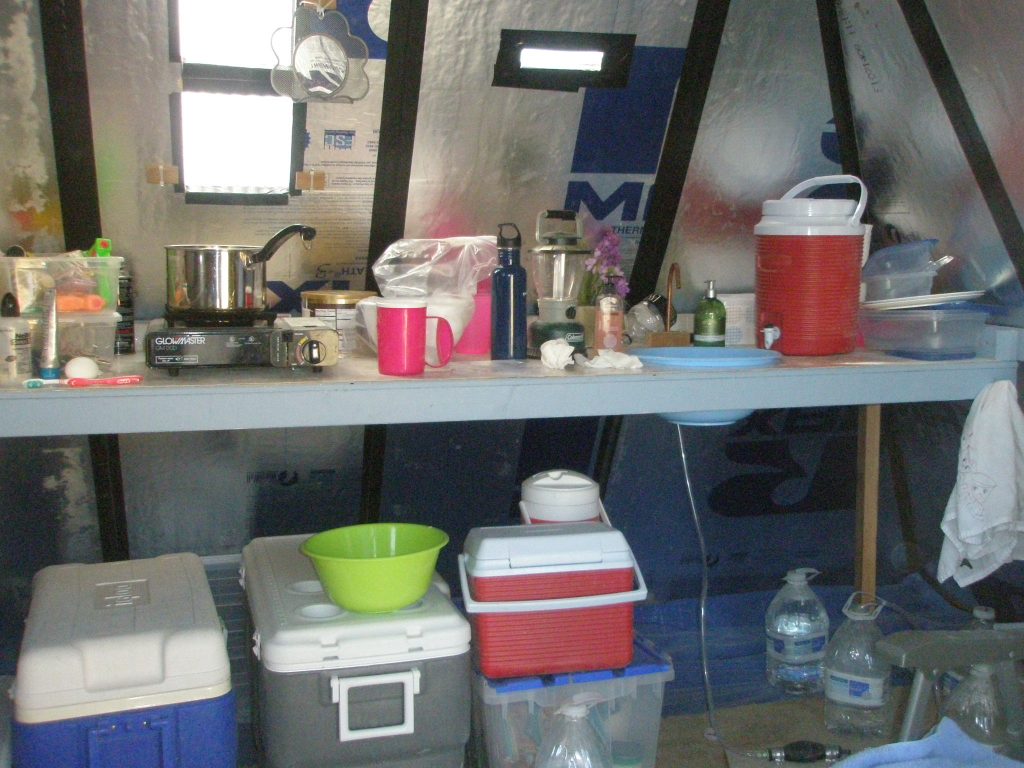 An 8 ft plywood and 2×3 counter was added. We cooked on a butane stove and had a sunken bowl sink. Water was foot pumped to the bowl using a marine gas primer bulb shown below. 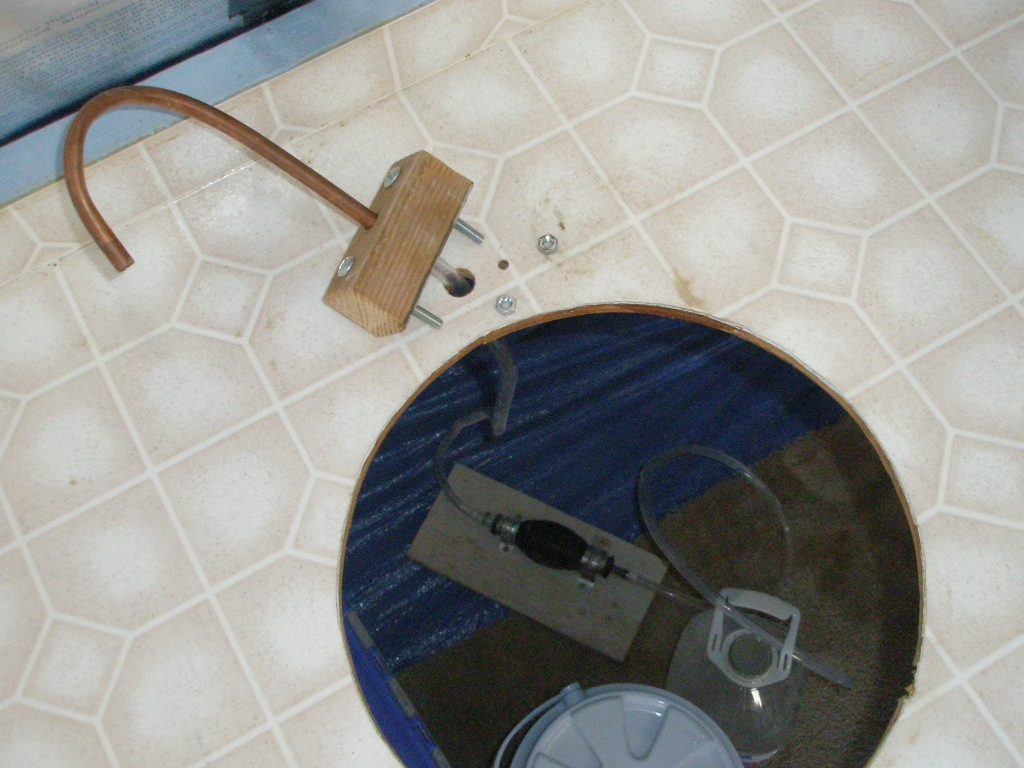 Here’s the copper tubing faucet detail with the pump shown through the sink cut out. It was simple and effective. 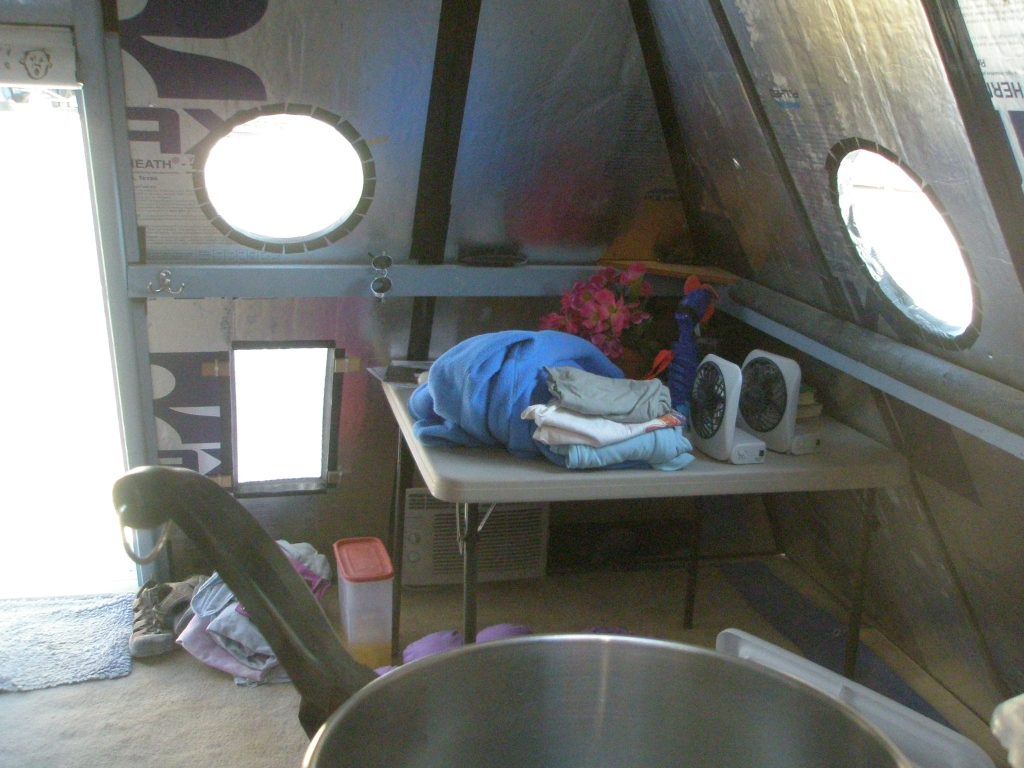 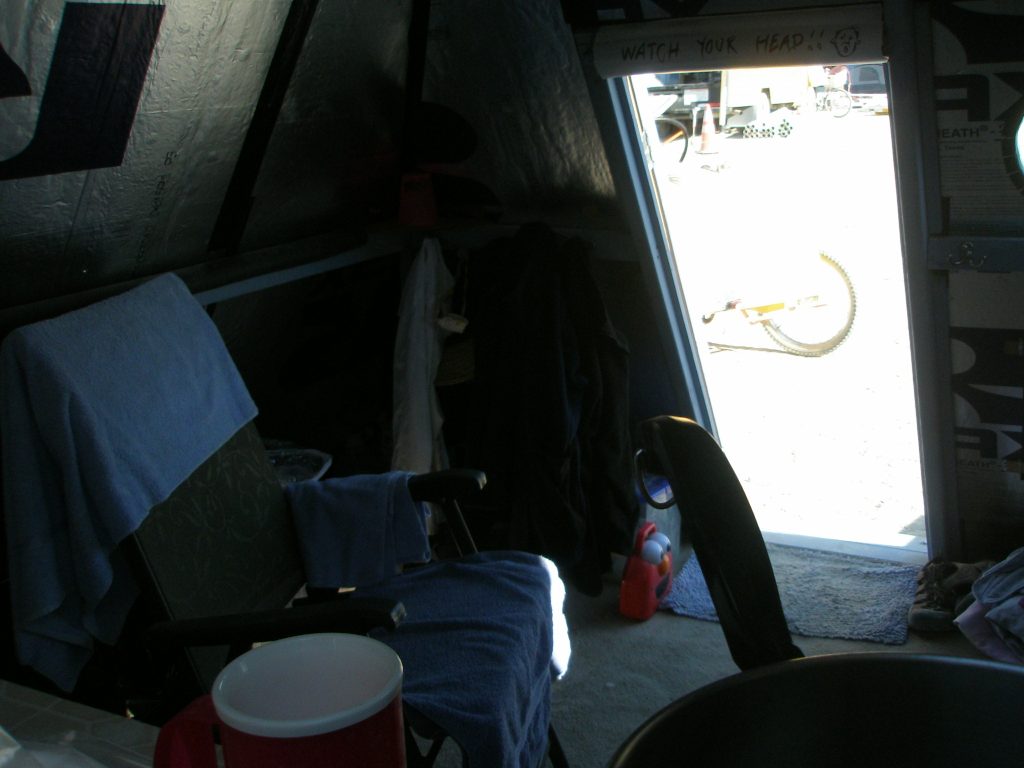 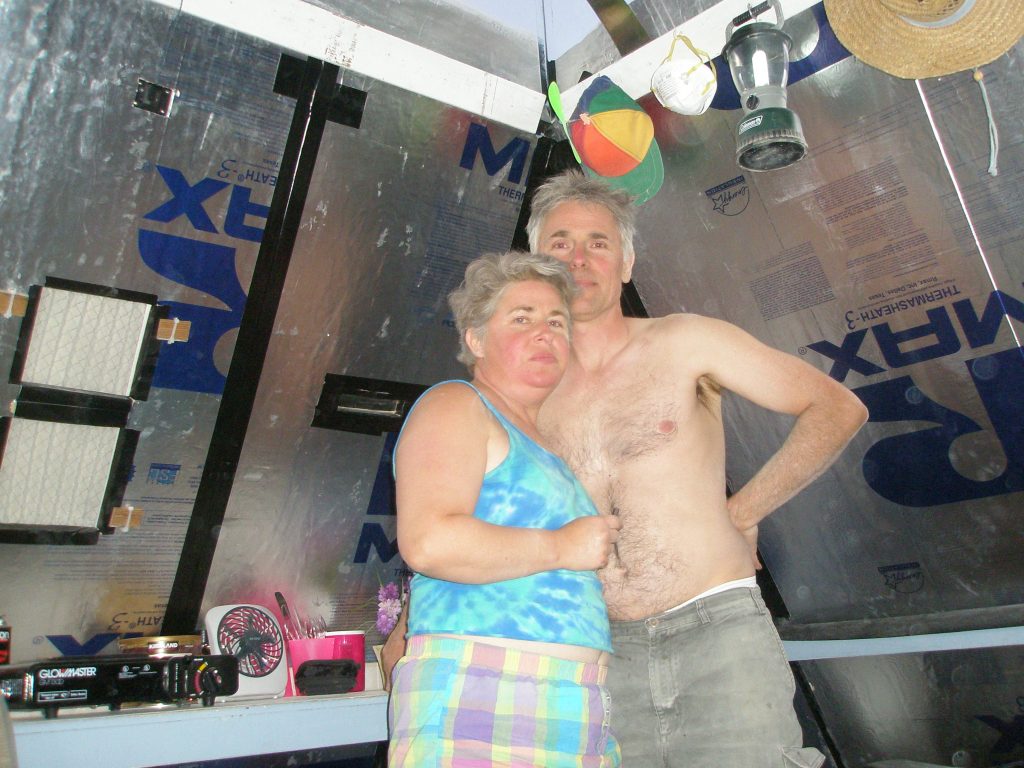 And pardon these crusty individuals. They just wondered in, probably looking for drugs or liquor.