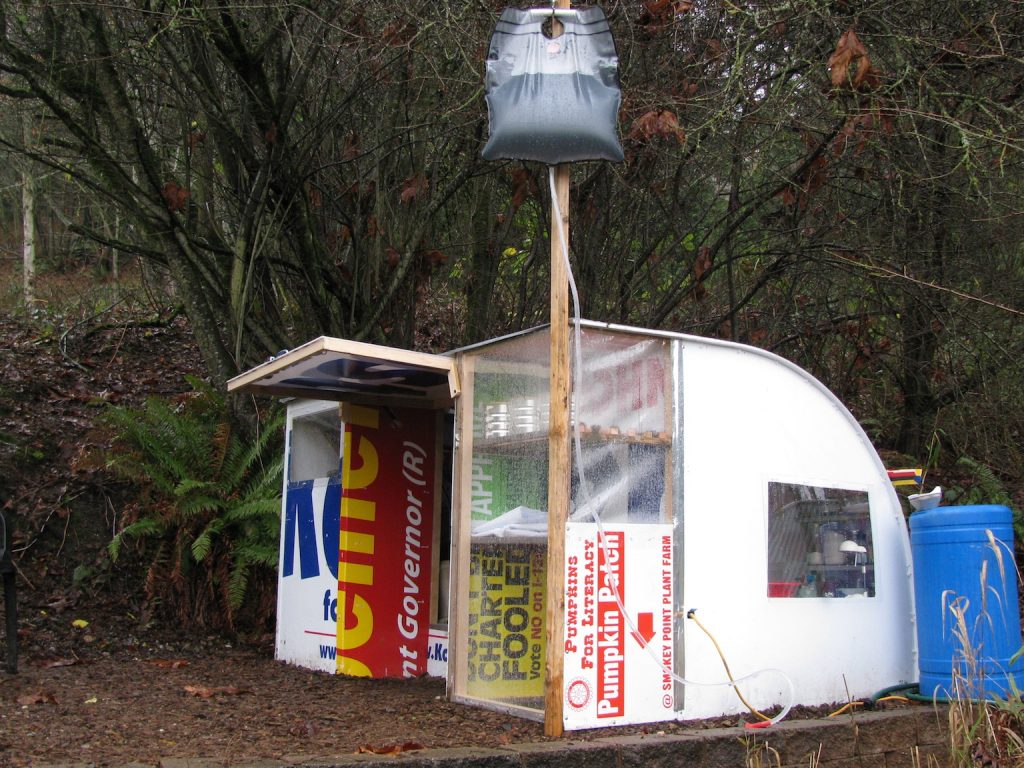 This 4 ft high by 8 ft long shelter was built almost exclusively from recycled election campaign signs including the lumber and hardware.

Attached to the exterior green house is a pole that holds the gravity fed solar shower bag positioned toward the sun. 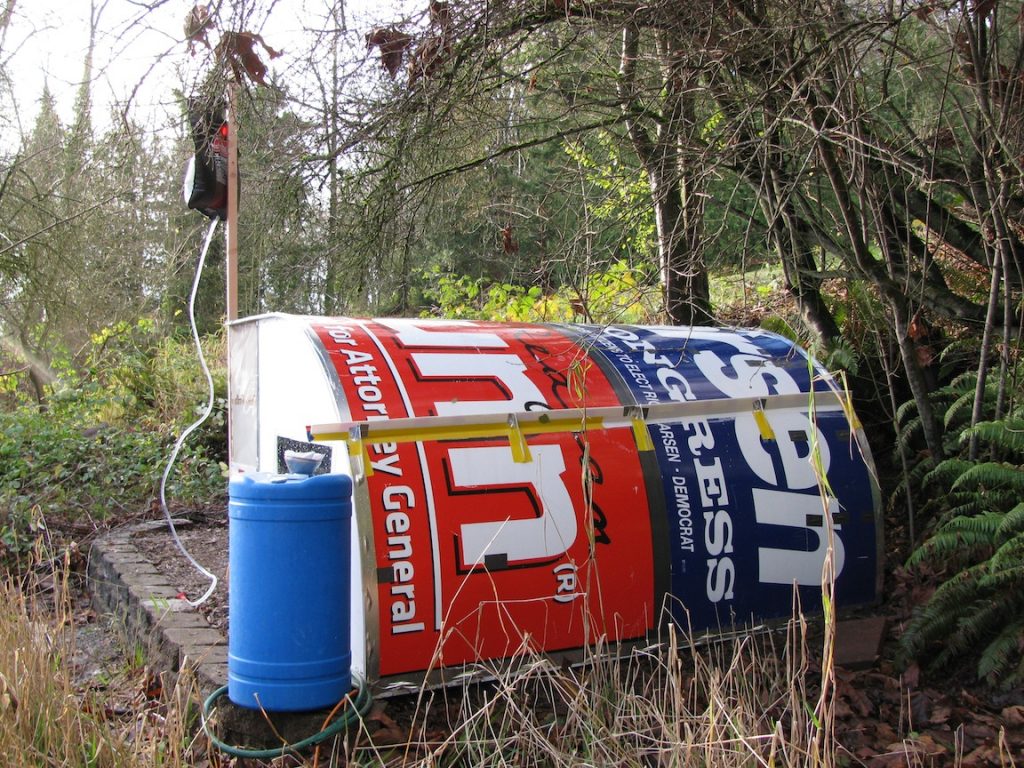 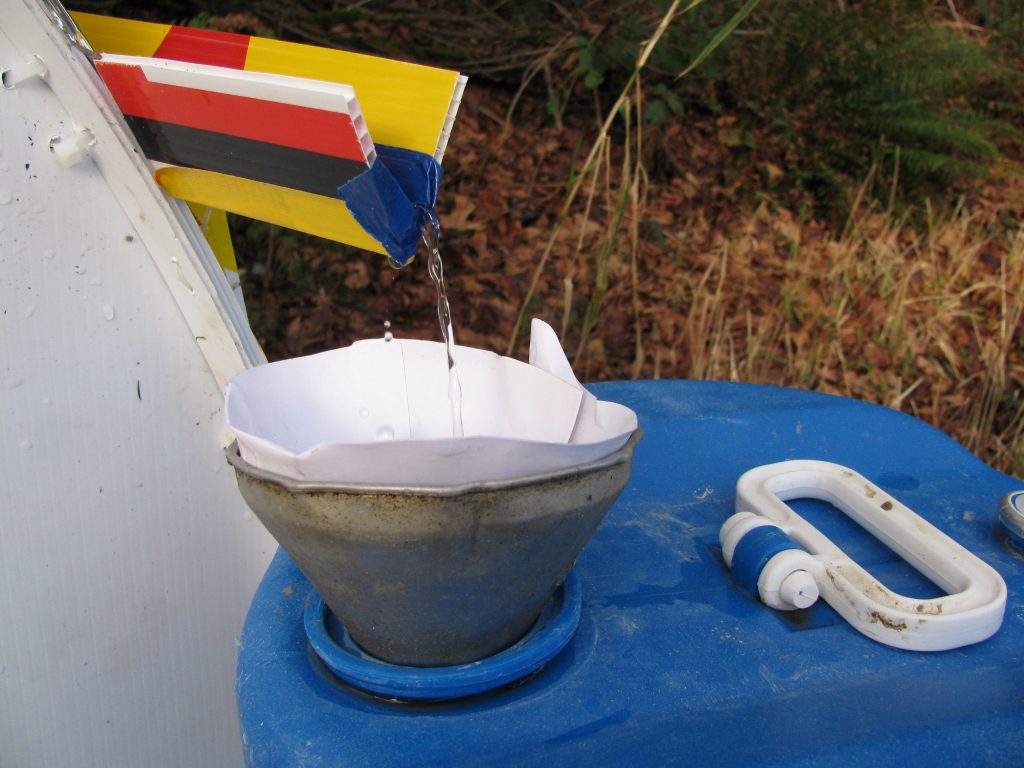 To keep out leaves and debris a paint filter was added to the funnel. To fill the shower bag you had to syphon water from the tank. 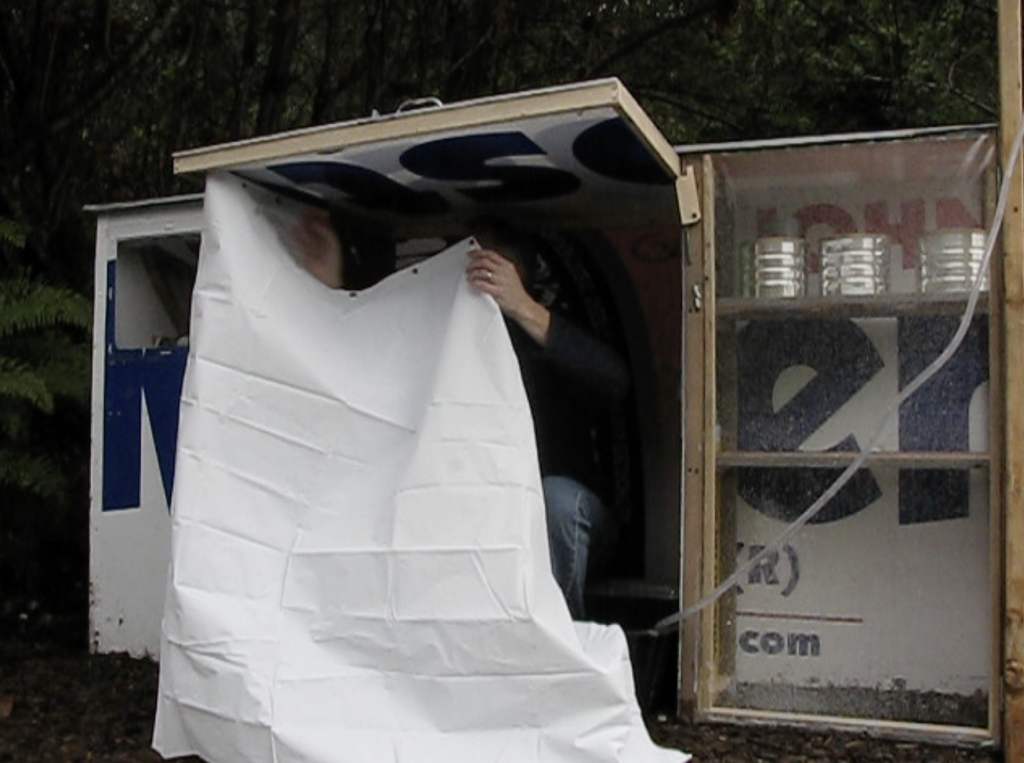 A plastic tray for mixing concrete was used to catch water while taking a shower. Here I’m adding the shower curtain around the perimeter of the swing-up door. 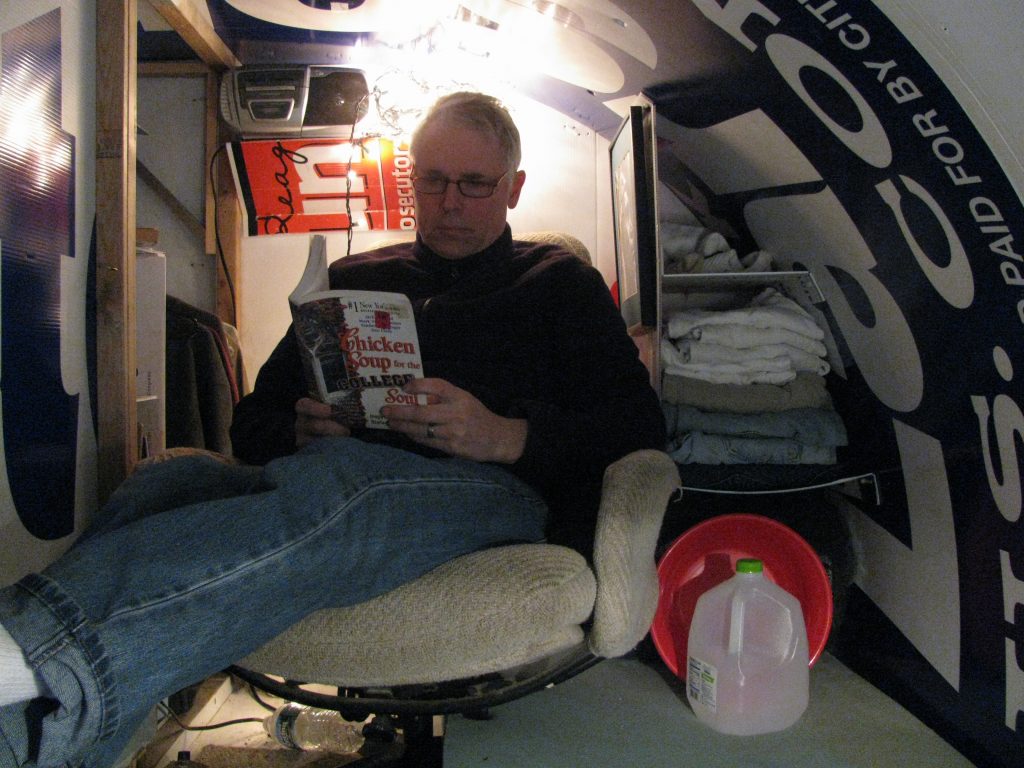 On the inside was enough room for my small recliner, a foam sleeping pad and storage for clothing. 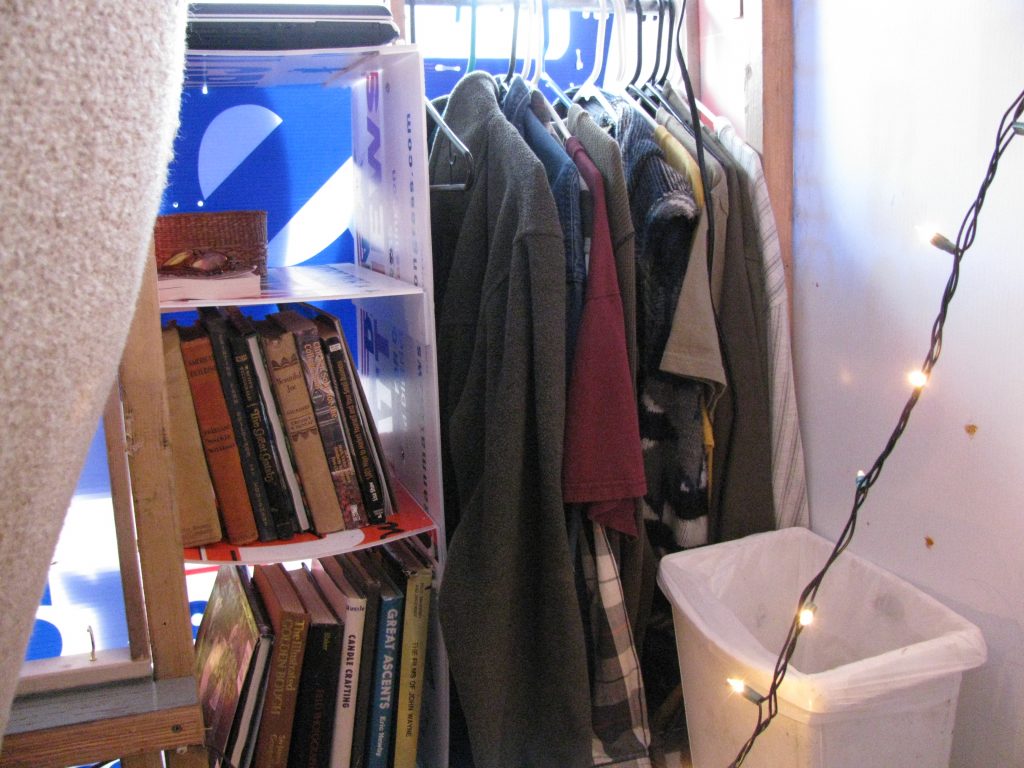 The other extensions had enough room for a few book shelves and for hanging some clothes. 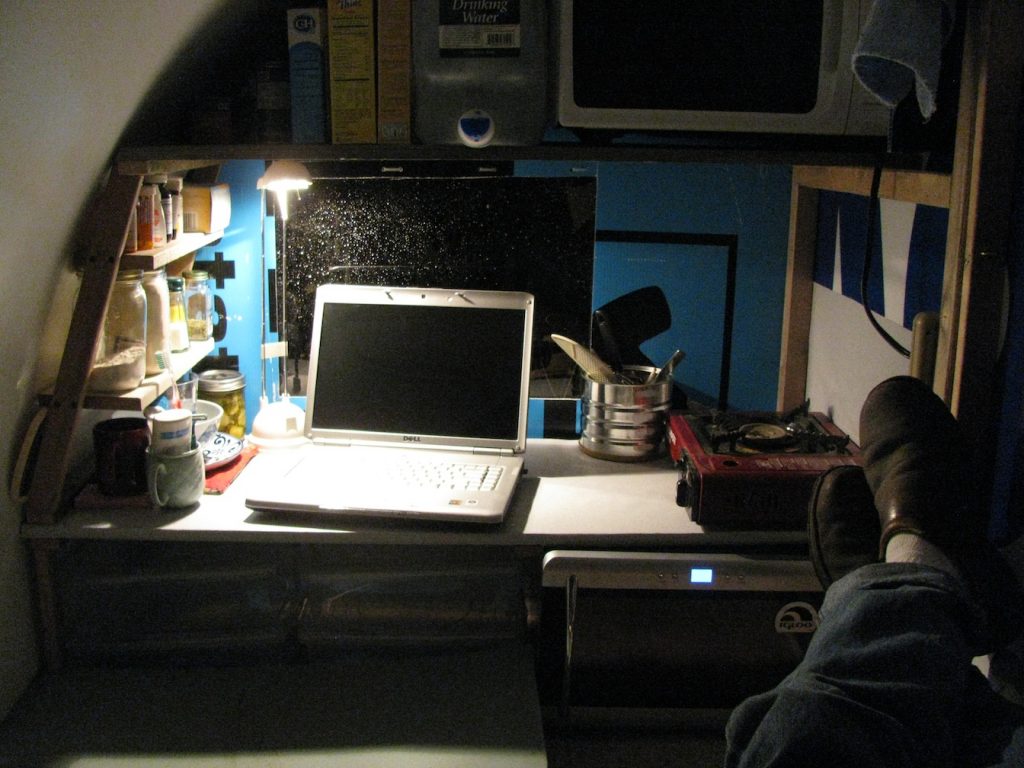 This not so great photo shows the kitchen. The window in the back ground could be opened up. 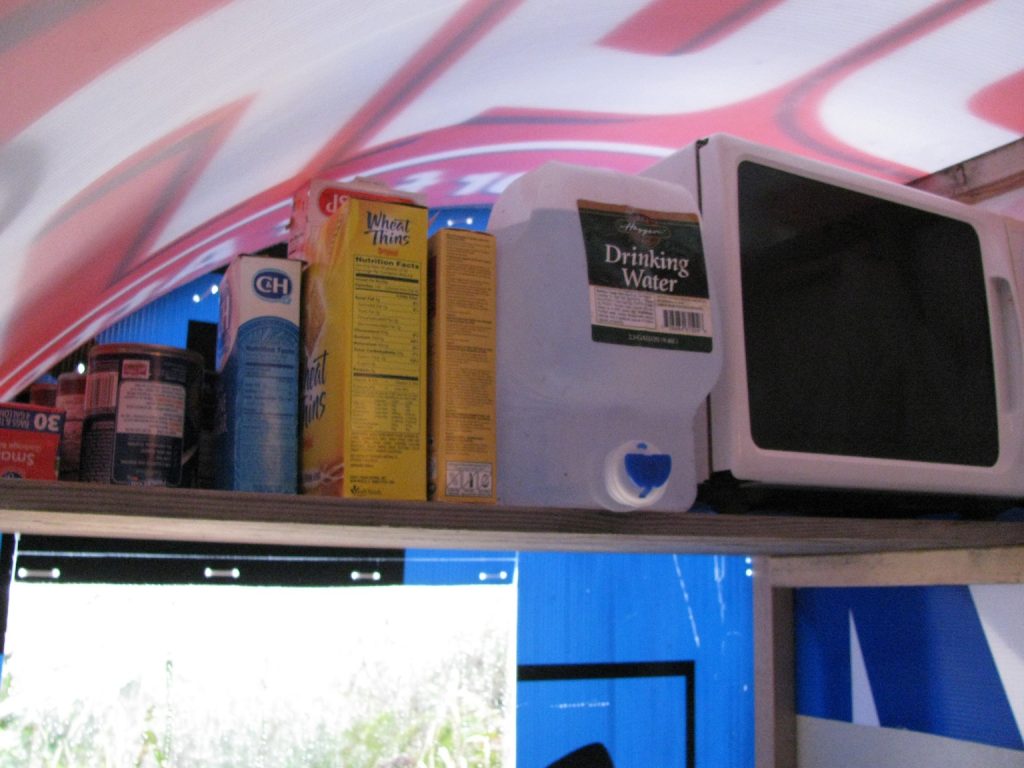 Above was room for a small supply of food, the 2-1/2 gallon fresh water jug and a micro wave oven. 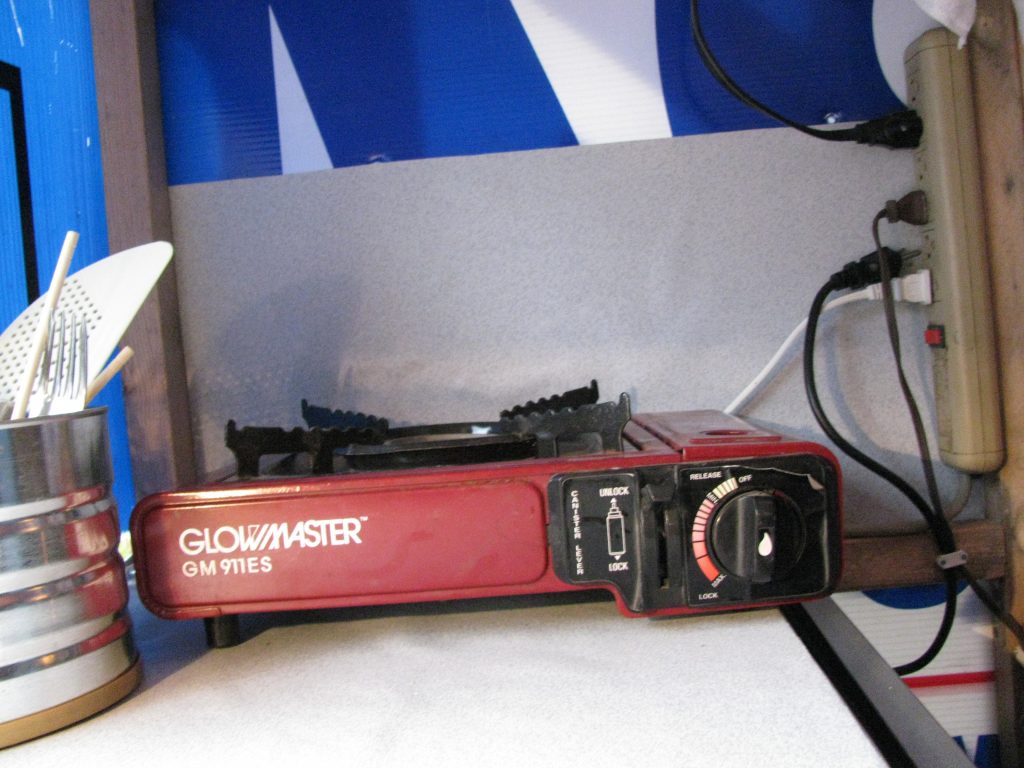 Below was a one burner butane stove and an extension cord with multiple AC outlets. 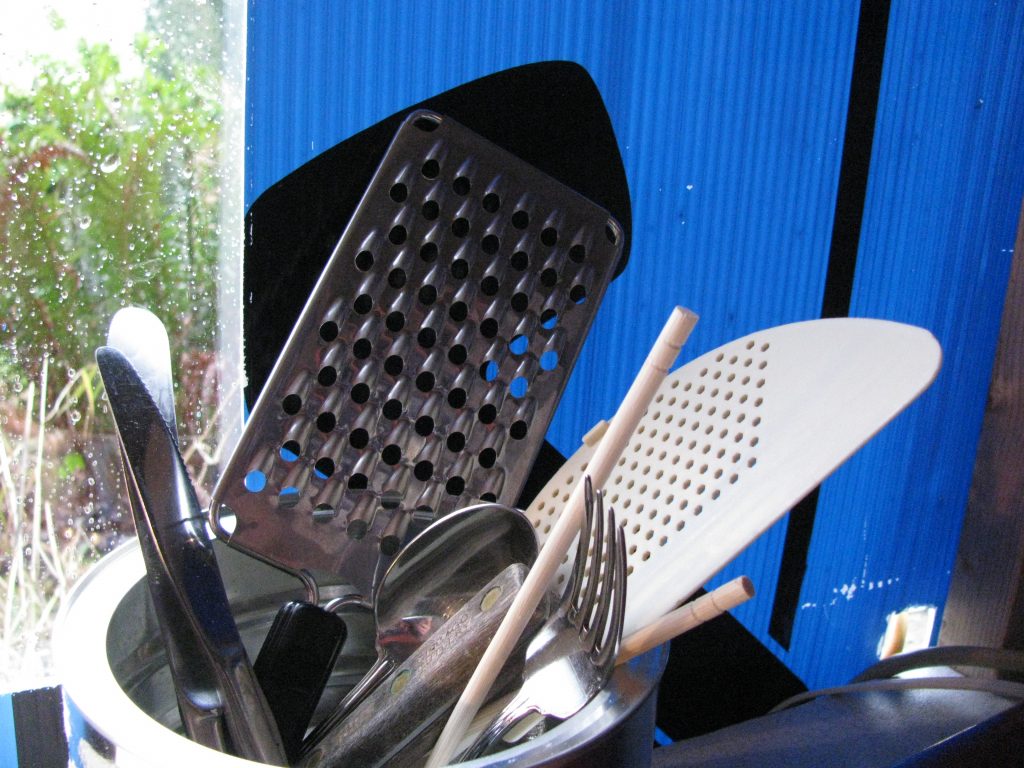 This was the handy all purpose utensil can. 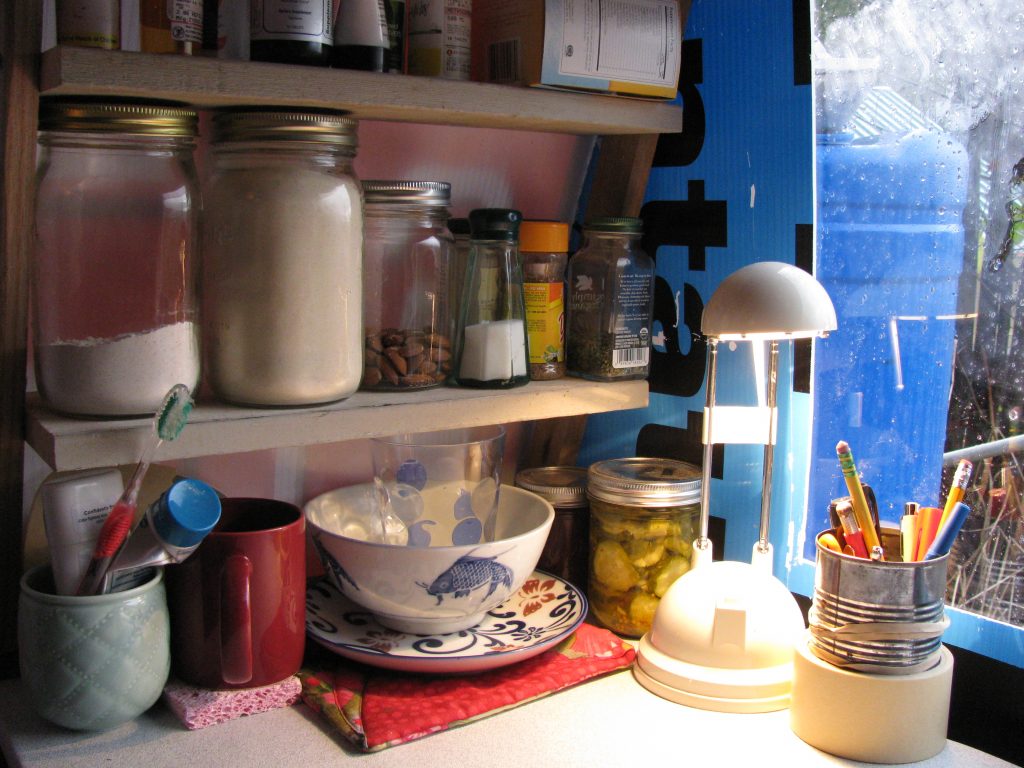 These selves held the spices and other food items. Living in tight quarters such as this would require the individual to pair down to one of every item. 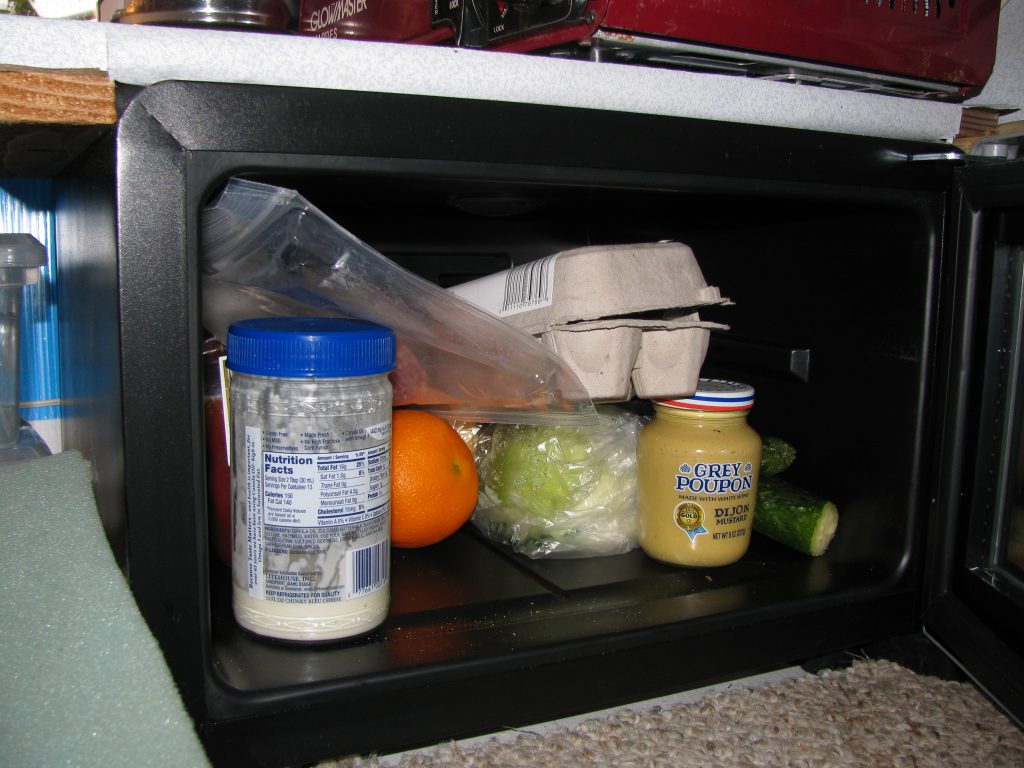 Below the stove was a small AC wine cooler which was smaller than the smallest commercial refrigerators and fit nicely under the low counter. 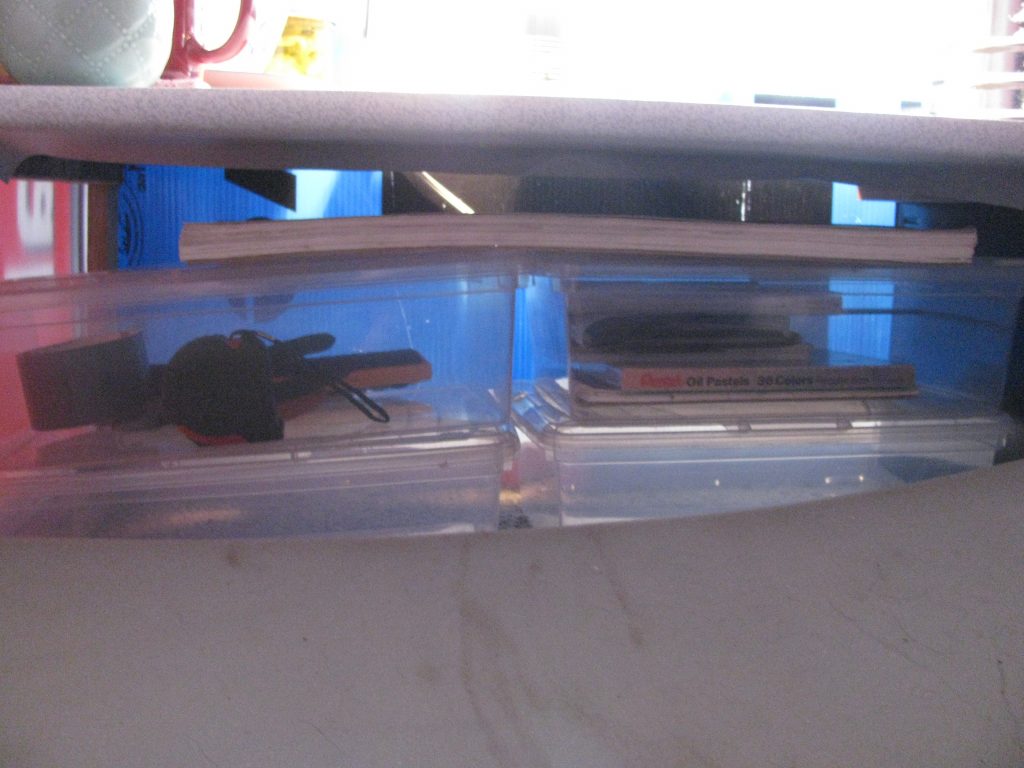 Four small storage bins for tools, hobby items or whatever was also located under the kitchen counter. 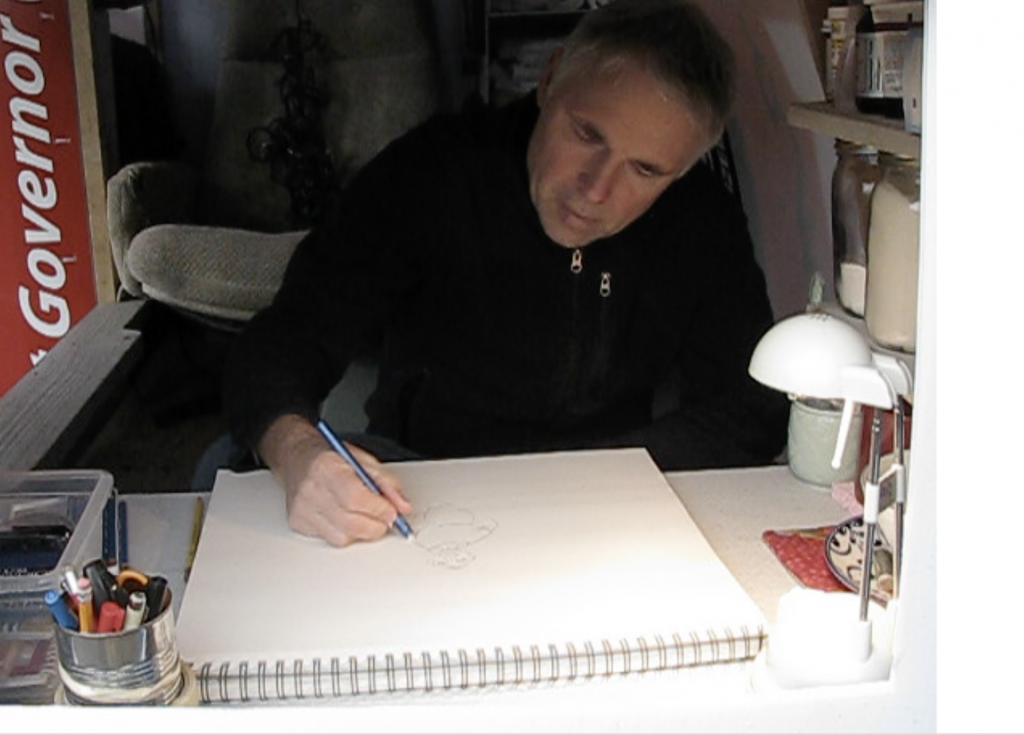 Moving the butane stove above the microwave oven freed up space on the counter for other uses. Dollar store shelf liner was placed over the 1×4″ counter boards for a clean surface. 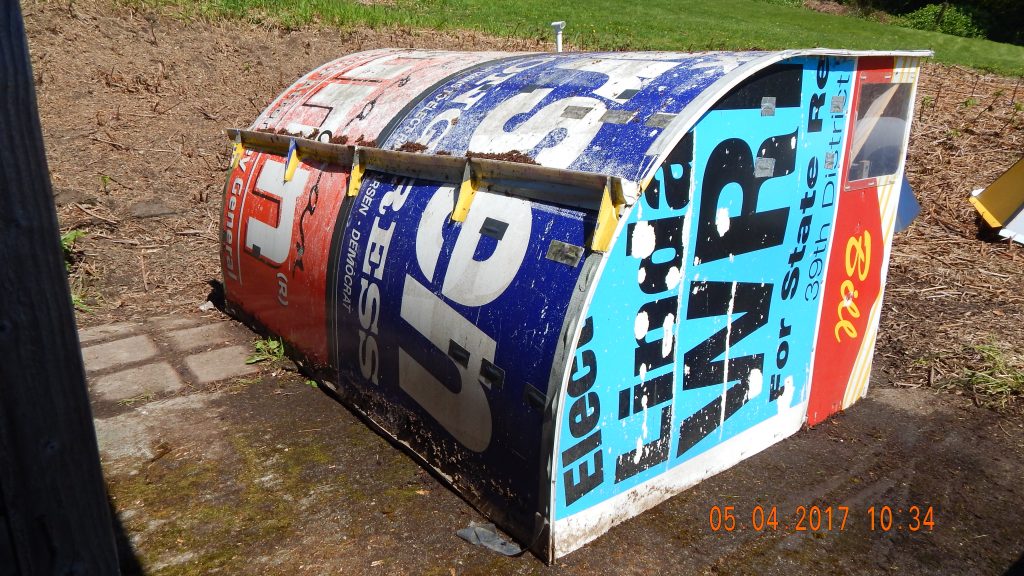 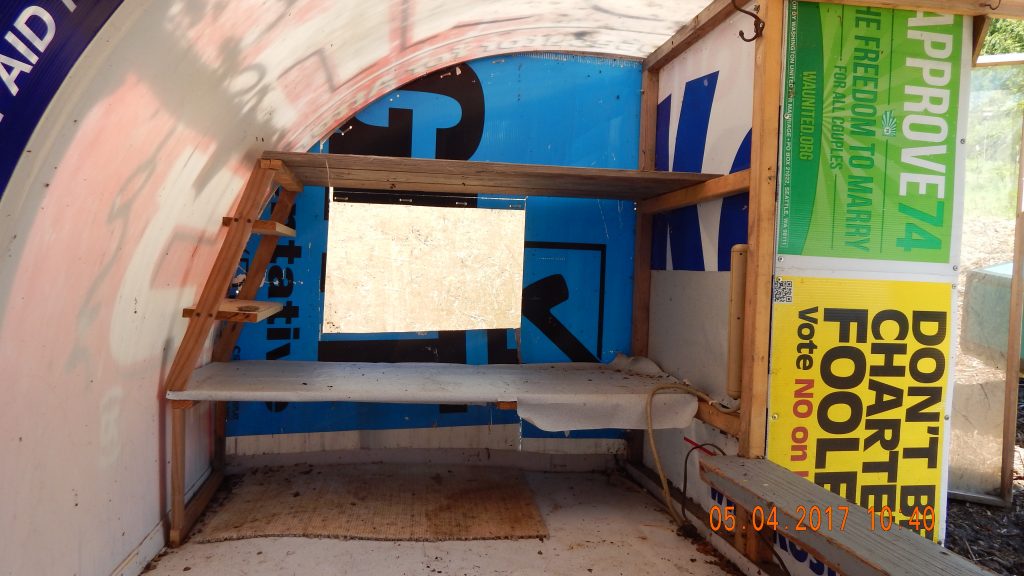 For the most part it held up pretty well. As you can see some of the ink was pealing, and the tape that faced the sun was delaminating, but all in all not bad for a temporary almost-free shelter. 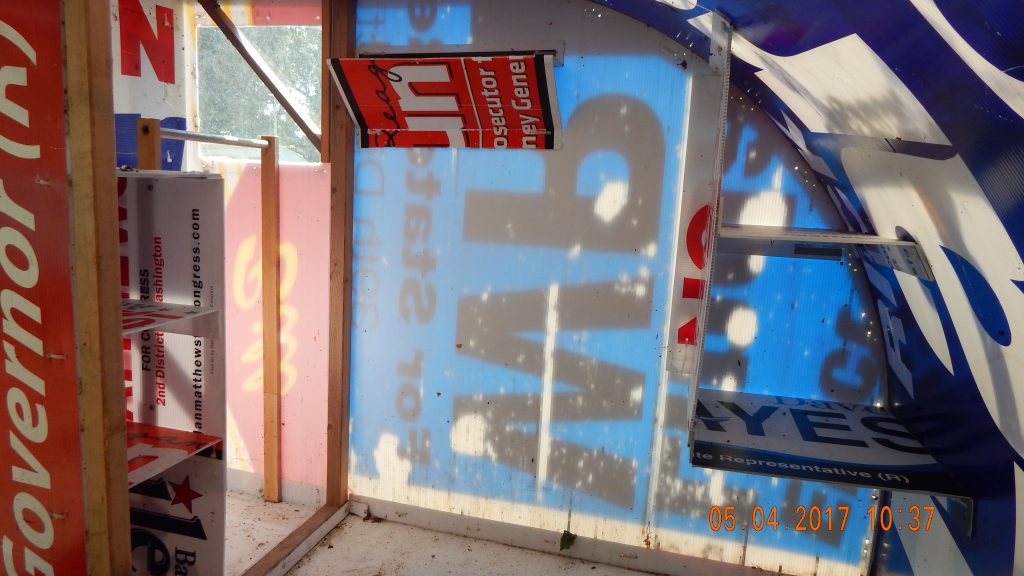 I really liked the cozy space it afforded. It was minimal to be sure, but it held most all the items one might need to get by, and it held up well during snow, wind and rain. 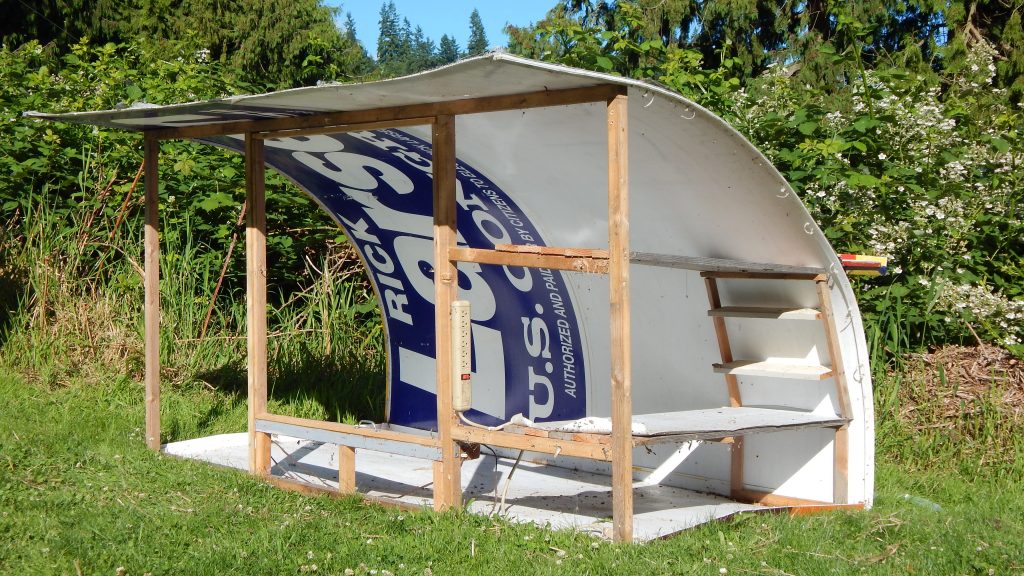 This might be something you can build for your son or daughter whose eager to be independent but not able to affort to leave your home. Or as office space, craft room

or as a back yard shelter for a homeless person in need of a small place to call home.